Phuket is an epitome of mass tourism. 40% of the tourists visiting Thailand come to Phuket. This large island on the Andaman coast is connected to mainland by a bridge which makes it easily accessible. The historical Phuket Town, with its 19th century Chinese merchant houses is far more pretty, nice and more interesting than Phuket’s coastline.

Phuket’s beaches (especially Patong) are far from ideal: crowded, rather dirty, full of jet-skies, with ugly high-rise hotels right on the beach. The seaside resort’s main attractions are bars and sex shows. Sea around Phuket is calm and turquoise only in the dry season. In the wet season, swimming isn’t allowed since the sea becomes rough and has deadly rip currents.

Originally, Phuket -the most busy and commercialized island in Thailand- definitely wasn’t in our plans. After Khao Sok we wanted to go the largest national park in Thailand- Khao Yai- and do some hiking there. Our plans changed when a friend living in Singapore suggested she could come over to Thailand for a couple of days to meet us. We tried to make it as convenient for her as possible and the cheapest flights from Singapore happened to be to Phuket. And so it was decided.

We headed straight to Phuket Town which seemed the most interesting place on the entire island. The bus took us to the Phuket Town station, from where we changed into a pink songtheow to the town centre.

The downtown Phuket consists of beautifully restored, century old buildings representing Sino-Portuguese style. As the name suggests, the buildings look very much European with a Chinese touch. There are a couple of grand mansions scattered over the old town, all built by Chinese businessmen who made a fortune during the tin trade boom. Even today, the old town is inhabited by people of Chinese descent and if you like authentic Chinese cuisine, you’ll love that place.

PHUKET TOWN ON A BUDGET

The accommodation in Phuket Town was more expensive than what we already got used to on the west coast but we managed to find a decently priced huge, en-suite room on the most historical street in the old town. Our host was a nice, elderly Chinese lady running a hotel, a souvenir shop and a fish cake stand. We saw her preparing fish cakes every morning. We really took to that lady since, unlike most Thai business owners, she did not try to sell us any extra services and allowed us to hang our washed clothes in the guesthouse’s courtyard.

Just like in any other Thai town, the food prices were really low. There was quite a large market a short distance from the street we lived on (serving also as a songtheow stand) and plenty of very cheap Chinese eateries, including purely vegetarian ones.

There were also a couple of night markets and a walking street, though they catered mostly to tourists and were slightly more expensive but still good value for money.

If you want to explore the island, Phuket Town works well as a base. It is because the entire network of songtheows start from here. If you want to move from one beach to the other (eg. from Patong to Kata), you often have to change songtheows in Phuket Town. The town itself is interesting and a living, authentic place so it’s worth to stay there at least two nights, particularly in the weekend when the night markets are open.

On our first day in Phuket, we went to explore supposedly the best beach in the area: Kata beach. We took a songtheow from the stand in front of the market for a flat fare of 40 baht. It was quite a distance, around 40 min drive, so the price was fair, especially that the locals were charged the same. The songtheow actually first passed by Kata village, then went to Karong beach and finally turned round back to Kata beach.

Kata beach was a fairly large, white sandy bay with some green hills in the distance so it looked quite pleasant despite being developed. It was definitely much busier than any other beach we had seen in Thailand but was still big enough to accommodate all the people without appearing too crowded.

The sheer number of the people contributed to making the beach more dirty than in other places in Thailand, especially in regard to cigarette butts. I heard that soon a cigarette ban would be enforced on Phuket’s beaches and I really think it’d be a good idea.

In terms of water sports presence, there were only two motorboats pulling the parachuters attached with a rope. As the boats kept to the far ends of the beach, neither disturbed people in the water. It was actually interesting to watch the tourist hanging helplessly in their harnesses while all the maneuvering was done by a local boy who literally hanged in the air without any protection.

The real problem wasn’t really the beach itself but the sea. From May onward sea around Phuket turned from crystal clear, calm oasis into a rough, deadly dangerous place. Big waves might be a source of joy to surfers but not to bathers and swimmers. Phuket was the only place in Thailand where we saw lifeguards on public beaches and it was for a good reason.

Every rainy season dozens of people drown in Phuket, mostly because they ignore the safety warnings. When we arrived on the beach, there were red flags along most of the beach with just 3 or 4 narrow guarded strips where one could enter the water. It didn’t really mean they were safe but one could assume the rip current was unlikely to be there.

Rip currents are a real threat on Phuket. They could take you out to the sea and if you didn’t know how to react and just try to fight against it to get back to the beach, you’d very likely drown. Apparently, the best way to deal with a rip current is to start swimming parallel to the beach until you come out of the current and then swim diagonally to the shore (read more here).

Rip currents aside, for me the most frightening were the waves themselves. Some of them were just about small enough to make a really cool jump but the others were too high to attempt it. Depending on where you were standing, you could dive underneath them safely or stand in water shallow enough to withstand the power of the crushing wave. However, if you had bad luck of being somewhere in the middle, you could get through a ‘washing machine’ treatment by a huge wave which would be far from pleasant and not safe either.

Sayak enjoyed the waves, being used to similarly sized waves on the other side of the Bay of Bengal where he spent his childhood holidays. I, on the other hand, being used to Baltic modestly-sized waves and smooth waters of the Mediterranean wasn’t comfortable with that level of roughness at all. Kata beach wasn’t an exception: Karon, Patong and most probably all the other beaches in the area had exactly the same sea conditions.

BUDDHA VIEWPOINT- PHUKET FROM ABOVE

On the second day, we ditched the beach and decided to see the Buddha viewpoint. Most of the visitors hired a taxi or a tuk-tuk to get there, but we wanted to avoid paying exorbitant prices. Getting to the Buddha viewpoint independently is possible, but requires a 6 km walk, mostly in the scorching sun so it’s not an option for everyone. 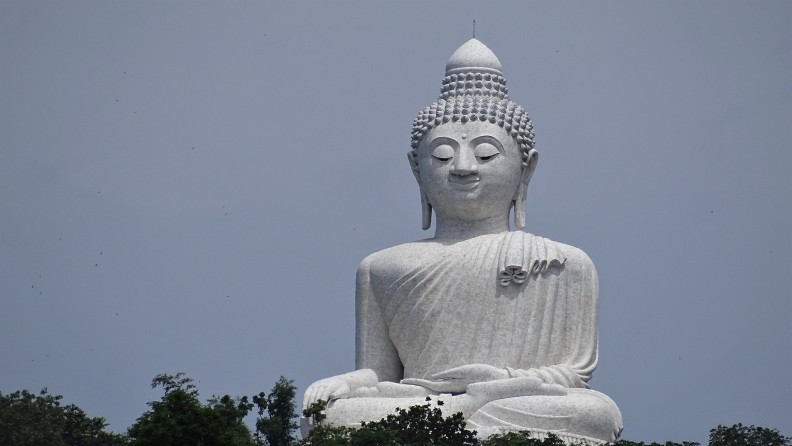 We took a songtheow to Chalong (on the route to Kata beach) for 30 baht and got off near the petrol station. Just tell the driver you’re going to the Big Buddha and he’ll drop you at the right place. We crossed the street and took a tarmac road heading towards the hill with a huge, white Buddha on top.

I must admit it wasn’t the nicest of walks. First of all, there was very little shadow for the first half of the way (until reaching the foot of the forested hill). Secondly, the road was quite busy with vehicles carrying tourists. Lastly, we had to pass by some elephants used for carrying the tourist and the sight of those poor creatures always makes me very sad. On the plus side, the walk was really easy as the road gently wound upwards and there were plenty of viewpoints on the way.

Just as I expected, the top of the hill was full of tourists but the area was big enough to find a quieter spot to sit down and enjoy the panoramic views at both sides of the island. There wasn’t much to see apart from the views.

I was genuinely surprised how many forest covered hills remained intact on this incredibly touristic islands. Most of the coast was scarred with high-rise hotels, though. Nevertheless, the bird-eye view of Phuket exceeded my expectations.

There were just a couple of altars, some of which were actually devoted to Chinese and Hindu deities.

We read in the blogs it was possible to walk through the forest all the way to Kata beach and we thought it’d be a brilliant idea, considering how hot and sweaty we were. We had to ask the cafe owners on the way how to find that path, though. The turn to the hiking trail was located around 500 meters below the top of the hill, shortly after a small viewing platform. There was a sign on a wooden board saying ‘Kata beach’ but if you didn’t know where to look, it’d be quite easy to miss it.

THE ‘WILDER’ WAY DOWN

The walk down was much more adventurous than going up: the path through a banana plantation was narrow and very steep. In many parts the ropes were attached between the trees for extra support. It was a pleasant getaway from the crowds. The path finally ended on a tarmac road where one had a choice to turn right to go to Karong beach or left to Kata.

We made our way to Kata beach intuitively (as Google wasn’t very reliable), heading consistently down through the Kata village alleys. We had to cross a very busy highway at some point and after further walk in the scorching sun, we finally reached the far end of the beach. Shortly after a refreshing swim, it started drizzling so we went back to Phuket Town. It must have been a peak hour since the journey was unusually long.

There were a couple more viewpoints in the area which we wanted to check out but rainy weather prevented us from a thorough exploration of the island.