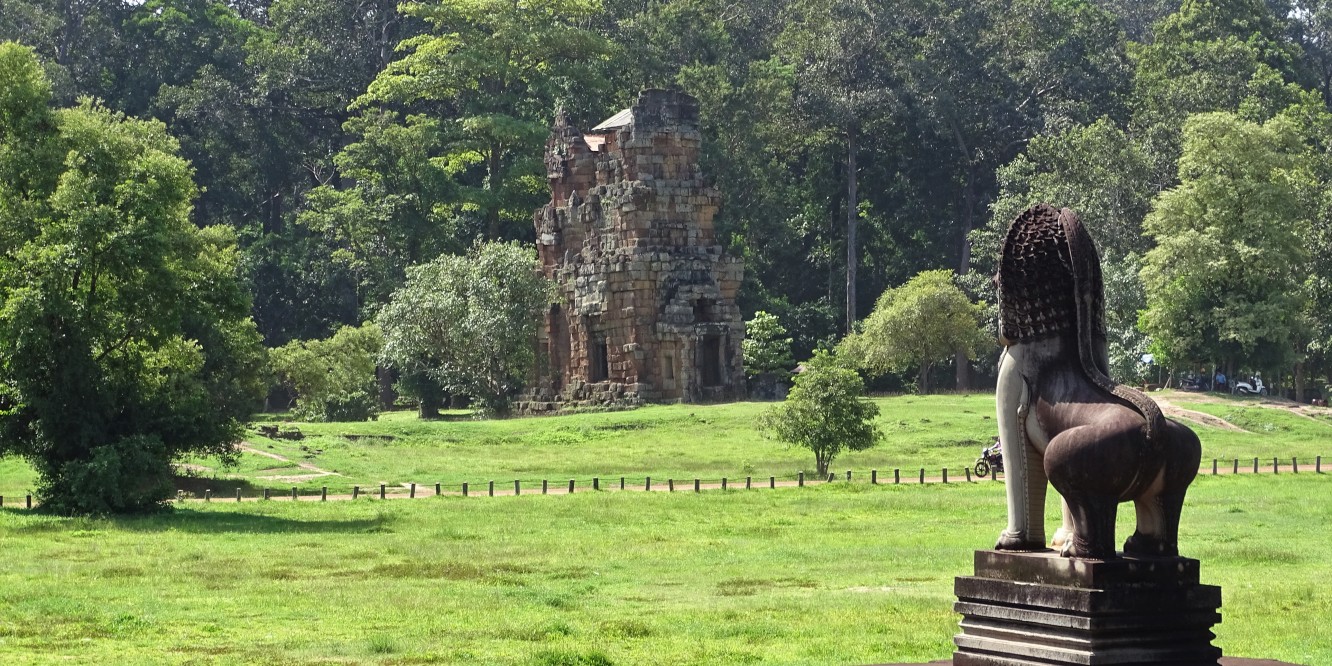 After a two days rest, we continued exploring Angkor Wat Archelogical Park. This time we wanted to devote an entire day to two most famous temples: Angkor Wat and Angkor Thom. That day involved much less cycling (25 km in total) but a lot more walking than the Grand Circuit route.

SUNRISE AT ANGKOR WAT
We were aiming for a sunrise at a lesser known temple of Phnom Bakheng but we got delayed due to a jammed bicycle lock. We arrived just on time to see sun rising above Angkor Wat, though. There were hundreds of people watching the sunrise from across the moat.

ON THE WAY TO ANGKOR THOM

As soon as the sun was up, we hurried to Phnom Bakheng. It was actually the only temple which was located on a natural hill. The path up was winding for quite a while, offering some views at the countryside and the enormous West Baray.

There were a couple of people going down just when we were making our way towards the temple which meant once again we managed to be almost alone. The temple itself wasn’t much of a thrill but the view from the top, including the main tower of Angkor Wat, was extensive.

We had our breakfast at the viewing platform overlooking the West Baray and moved on to an easily overlooked Baksei Chamkrong: a small, pyramid shaped temple right next to the path leading to Phnom Bakheng. After a short photo stop, we pedalled to the southern gate of Angkor Thom.

ANGKOR THOM COMPLEX
Faces of asuras and devas in front of the Southern Gate were all complete but only because they had undergone a reconstruction. That, in my eyes, made them less appealing than those at the Northern gate. We cycled through the gate and stopped at the iconic Bayon temple.

The sun was just rising above the surrounding forest but it wasn’t very busy yet. In fact, what we noticed at this and many other temples was that 90% of the tourists headed straight to the top/center of the temple which left the majority of the temple grounds open for undisturbed exploration.

We were awestruck by Bayon, famed for its the multiple towers with carvings of colossal faces.

It was the only temple where we saw a pack of monkeys, walking carelessly on the stairs and roofs of the edifices.

We were enjoying a relative peace and quiet until an invasion of Chinese tourists caused our retreat.

That day – unusually- we didn’t use the map so we got slightly confused with the order of sightseeing. We followed the road along Terrace of the Elephants and parked our bikes between Northern and Southern Khleang, small but very picturesque buildings hid amid the green meadows and trees.

We walked through a completely deserted Terrace of Elephants and Terrace of The Leper King, one seamlessly blending into the other.

On the other side of the terraces and a bit further through the sparse woods stood Phimeanakas- a royal chapel.

From there, we ventured to a rarely visited cluster of small temples north of North Kleang (Preah Pithu group). We were rewarded with a view of a pond full of lotus flowers.

It was only after visiting all those places did we realize missing the imposing Baphuon temple. Baphuon was a tall, multi-storeyed temple with a long causeway leading to it.

The real surprise waited for us when we got to the back of the temple. The entire back wall was in a shape of a reclining Buddha. That was 15th century addition, done after the temple was converted from Hindu into a Buddhist one.

Much more logical order of visiting the area would be: Bayon-Baphuon-Phimeneakas and then both terraces on the way back.

It was getting towards noon when we got on the bikes again. We stopped in front of Phnom Bakheng to have a fresh cold coconut there. It was a good choice. Just because we were the only people around we got lots of attention from the seller. It seemed as if most of the tourist didn’t ask for cutting the coconut after drinking. That is a mistake: we used to buy a huge $1 coconut which contained not only lots of water but also plenty of flesh to eat. That meant we had a cold drink and a lot of food for two, just for one dollar. I have no idea what prompted it, perhaps we looked hungry or poor or otherwise deprived or maybe the lady just got to like us but we also got a huge bunch of bananas for free. Thus refreshed, we arrived at the last and most important stop of the day.

It was a perfect timing: in the late morning-early afternoon Angkor Wat was at its emptiest because of the strength of the sun. We were relieved to see there were very few people when we arrived. To be honest, sun wasn’t much of a problem since, unlike any other temple in the area, Angkor Wat had complete ceilings, offering much needed shade.

We spent at least one hour just encircling the outer wall of the temple, watching the stunning, intricate bas-reliefs. I was lucky to have Sayak with me who was able to decipher some of the scenes from Hindu mythology. To avoid being clueless about the meaning of the carvings, either use one of the mobile apps or hire a guide right in front of the temple for $10.

The next level of Angkor turned out to be less spectacular: it featured just a couple of Buddha statues, all adorned with saffron scarves.

The very top level required climbing a small fleet of stairs. In the peak times, people would need to queue to get in and have a limited time to visit (as far as I remember 15 minutes) but when we were there, we went straight up and had plenty of opportunities to enjoy the temple from the bird-eye-view.

As usual, it was starting to get crowded just as we were making our way down (after 3 hours of peaceful sightseeing). We circled the entire temple and as nobody bothered to do the same, we managed to take some great photos.

LAST LOOK
We then stayed for a while on the other side of the moat, snacking on sugar cane juice, bamboo sticky rice and lotus seeds from the stalls. We quickly thought about staying for the sunset but the idea of waiting 2 hours just for that and then coming back by bike in the darkness didn’t really appeal to us.