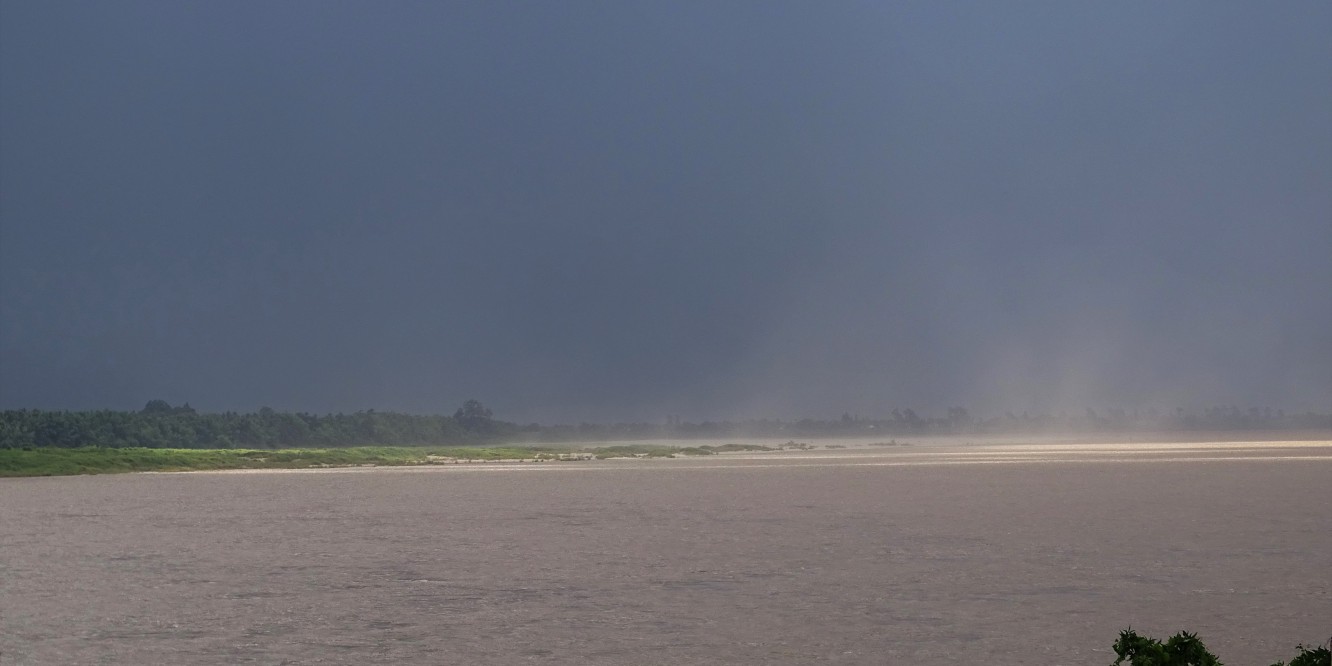 Kratie is a small and quiet town set beautifully at the banks of Mekong. It’s a kind of place you don’t mind spending a few days, just watching sunset over the Mekong and not doing much. There is a lovely island facing the town which is a perfect place to get a taste of rural Cambodia. But Kratie’s major draw is a spot a bit further up river where one has almost 100% chance to watch endangered river dolphins. Kratie is thankfully unspoiled with mass tourism, making it a very refreshing alternative to Siem Reap.

As soon as we arrived to Kratie, we noticed it was by far more pretty and relaxed than Kampong Cham. We wouldn’t mind staying for a couple of days in Kratie but as we had a couple more places we wanted to visit and rather limited time, we ended up staying just for two nights.

We took it easy on the first day. We just visited the thriving local market and walked along the river. The highlight of the day was watching an amazing sunset from our guesthouse.

KRATIE ON A BUDGET

We found an amazing guesthouse with a balcony overlooking the river with a great value for money ratio. Like in many places in Cambodia, we could refill our water bottles for a nominal price.

As Kratie had just a couple of guesthouses, it wasn’t difficult to buy baguettes, snacks or fruit for local prices.

We were a bit disappointed to experience some sort of culinary apartheid in the town, though. There was a clear division between restaurants catering for tourists (mostly pricey, however we managed to find a more affordable one) and the Cambodian restaurants which not only didn’t have an English (or any other) menu but also the waiters didn’t even bother approaching us when we were entering. It was a bizarre feeling to be ignored utterly. Due to my veganism, we dined at the cheapest backpacker’s restaurant, near the Kratie market.

We started our day in Kratie early in the morning, hiring bikes from our guesthouse and heading to the market for breakfast. After stocking with various sweets and snacks, we rode to a ferry crossing to Koh Trong island.

There were quite a lot of stairs leading down to the river but it was possible to lead the bike down a narrow ramp. A small boat left only after filling up and cost peanuts to cross, even with a bike. We opted for taking a bike with us as we were going to use it for the entire day but it would also be possible to rent a bike on Koh Trong itself for a dollar.

Koh Trong had just one, very narrow, almost entirely paved road encircling the island. Riding the bike along that circular road and watching the countryside life up close was pretty much all we could do on the island. That didn’t change the fact the two hours we spent on the island were thoroughly enjoyable. The ride was easy and very pleasant, with lots of shadow at most of the trail.

The island was very peaceful and pretty. All the houses were wooded, stilted constructions. I got to see the bottom of one when a friendly stall seller invited me to use her toilet. The open kitchen (just a hearth) was right under the house, along with a simple bathroom and toilet. I assume upstairs must have served just as a bedroom. At the time we were there (July) the trees were heavy with ripe pomelos. Although some people rode motorbikes, pony carts and ox carts were still in use.

At the far edges of the island, where more bumpy dirt roads led, we could see paddy fields and cow pastures. There were a couple of nice view points along the way as well as one beach (mostly flooded in the rainy season). We stopped at a roadside cafe near the beach to have coffee and a coconut for a bargain price.

The loveliest part of the island was its southern tip, full of sand dunes and open views at the river. If not for the strong sun, we could have stayed there for ever, just watching the river. There was even a small floating fishing village nestled to the shore.

For some reason, on our return journey we boarded a much bigger car ferry. The price was the same as for the passenger one, though. After having a lunch near the market, we started cycling to Kampi, 16 km away.

Kampi is famous for the Irawaddy dolphins and, as we read, there are also picturesque rapids nearby. Therefore, we had quite high expectations relating to this trip.

Whichever means of transportation you choose to take to Kampi, be ready for a VERY bumpy ride. The road was in a terrible condition. As it was a main road, the ride wasn’t as pleasant as on Koh Trong but the traffic wasn’t heavy either and there were mostly motorbikes and some hybrid vehicles passing by. The road led along the river but the river itself was visible only from time to time.

We passed by a temple on a hill without seeing it, mostly due to lack of time but it also seemed there were too many trees to hope for much view. It was really hot that day, with only the breeze from the river cooling us down.

It was a bit early when we arrived at a completely deserted dolphin watching spot. There were only four other people who visited that day. We decided to wait until 4 pm with a dolphin tour as I read somewhere it would be easier to spot them in the late afternoon.

RAPIDS WHICH WERE NOT THERE

In the meantime, we cycled 2 km further along the road to see the Kampi Rapids. The rapids must be a dry season phenomenon: all we saw was a very wide river with some trees submerged partially under water. There were lots of wooden shelters designed for picnics by Cambodian families but they could be used only for a fee. We just took a few photos there, had some snacks sitting on a public bench and headed back to see the dolphins.

The price of $9 per person for a 60 mins boat ride was very fair considering the dolphin spotting was pretty much guaranteed. We would have enjoyed the ride on the river even without seeing anything but the appearance of the dolphins made me ecstatic.

They were everywhere around us, popping up for a split second here and there. We could hear them when they were exhaling and some of them were just 2-3 meters from the boat.  We were watching them in awe for good half an hour until the boatmen turned back. Please keep in mind that Irrawaddy dolphins don’t behave like their marine cousins: they don’t jump and are rather shy so don’t expect to see more than the top of their head, dorsal fin and back.

It was high time for us to head back to town. Just 2 km before Kratie it became very dark and extremely windy. We started cycling really fast for fear of getting caught in the middle of the storm. Luckily, it was a false alarm. We arrived at the guesthouse really tired but dry.

Our guesthouse organized a very comfortable minivan to Phnom Penh for us. We were going to leave in the late morning the following day.

How to get to Kratie?
There are buses and minivans to Kratie from Siem Reap, Phnom Penh and Stung Treng as well as minivans to Kampong Cham. Our shared minivan from Kampong Cham to Kratie took a road through plantations which didn’t even appear on Google. It was a bumpy ride.

Prices [in USD as of July 2018]:
$9 river dolphin watching trip
$7 minivan to Phnom Penh
$6 spacious double room with shared bathroom and a river view
$5 minivan to Kampong Cham
$3 a boonie hat from Kratie market (after bargaining)
$2.50 meal at a backpacker’s restaurant
$2 bicycle rental for a whole day
$0.75 return ferry fee to Koh Trong for a person with a bicycle
(1000 riel per person one way + 500 riel extra for a bicycle)
$0.75 coffee

One Reply to “Kratie- Irrawaddy dolphins and idyllic Trong island”