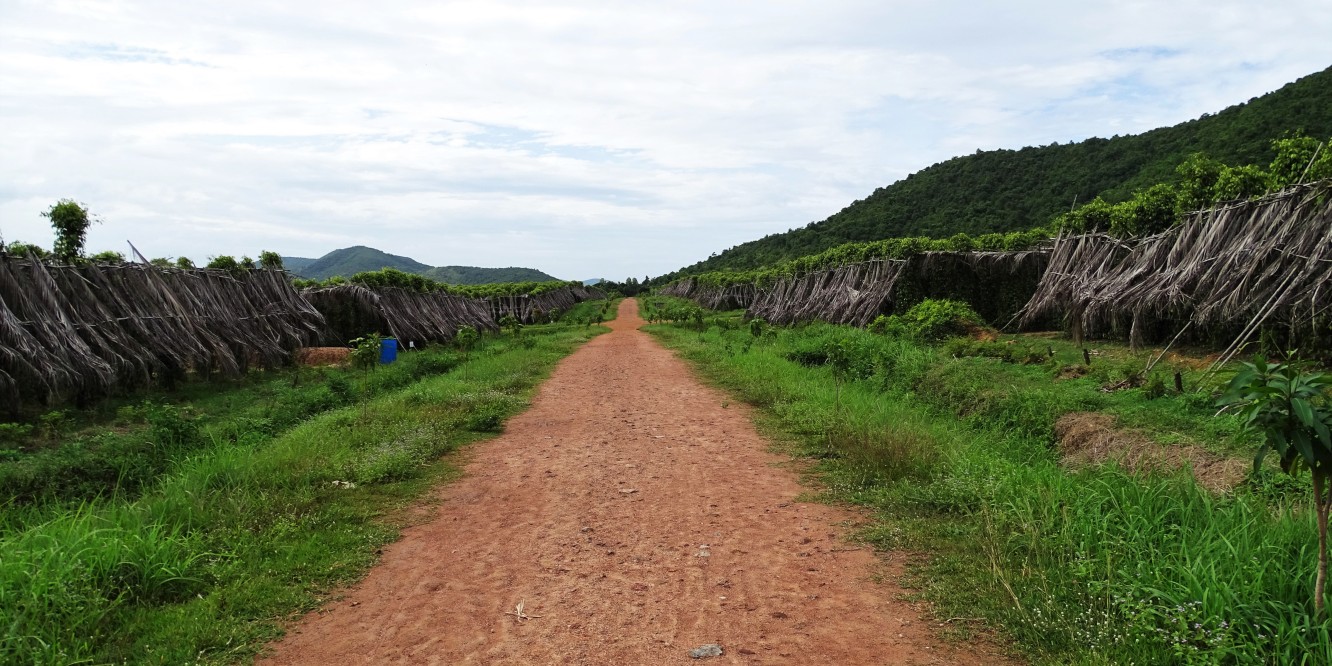 Kampot– a  sleepy town located not far away from the coastline at the banks of a beautiful river is another pleasant destination with a chilled out vibe, favoured by the backpackers. There is plenty of budget accommodation along the riverside and one can just stay in a hammock, watching the river and the mountains in the background. Kampot is famous for production of excellent pepper and a visit at one of the farms is a must. In the dry season, also salt fields make for an interesting sight. The most atmospheric, though is a nearby Preah Monivong National Park (aka Bokor)- hilly area with a misty, wet micro-climate reminiscent of Scotland.

STAYING AT THE RIVERSIDE- KAMPOT ON A BUDGET

Kampot welcomed us with rain and cooler weather. I had read before that July was a peak of the rainy season in Cambodia but as we didn’t really experience any rain for the first two weeks of the trip, I did not expect it to be much of a problem.

The train station in Kampot was far away from the town so we had to use Pass App (as usual much cheaper than the price of tuk tuk drivers waiting in front of the station) to get to our accommodation, located far on the other side of the river. Most of the budget guesthouses and bungalows were located on the other side of the river from Kampot town, requiring a longish walk, or a bicycle/motorbike ride to get you to the town.

Our budget accommodation (just $5 a night) was a simple but spacious hut with a shared bathroom. It was actually a good idea that the bathroom was separate as it kept the insects away.  Like with any huts, the only way of preventing night visits from mice was restraining from storing any food. We forgot about that golden rule and had to listen the whole night to the nibbling of a cute little mouse.

The huts were some distance from the river but there was a nice common area overlooking the water. The river looked quite murky and uninviting to me but there was one brave guy swimming to the other bank and back every day, weather permitting.

The downside to staying outside Kampot was the distance to the market and cheap dining options in town. However, we were lucky: a backpacker’s budget restaurant just relocated from Sihanoukville next doors to our accommodation.

We spent two full days exploring the area by a scooter (the distances were too huge to cover them with a bicycle). Luckily for us, we didn’t experience any rain on the first day. We started our trip with at a huge and very lively Kampot market.

Kampot market was one of the most interesting ones we had seen in Cambodia: a really big network of passageways where one could easily get lost. In the centre, there were many jewellery stands where gold jewellery was made and sold. All the remaining space was filled with dead and alive chickens and ducks, seafood, fish, vegetable, fruit and lots of stalls serving meals. Miraculously, I found one stall selling only vegetarian food: delicious gooey yellow crepe and noodles with vegetables for mere 75 cents, At a sweet stall, I had a bowl of my favourite sweet: beans with coconut milk.

Outside the market, scattered all over the town stood the trucks and stalls full of  oval, spiky fruit, roughly size of a pineapple- durian. Kampot is the Cambodian capital of durian- an infamously smelly, very sweet tropical fruit. Durian is very much a love-or-hate kind of food and I never took to it but if there is one place to try it, that would be Kampot. Bear in mind that durian is quite expensive, as compared to other fruit and often sold whole.

After stocking up with the food for the trip we headed by the main road to Kep. We stopped at famous crab market which is worth visiting even if you don’t plan to eat anything there. It is literally at the seaside and the crabs are being caught and picked from the sea meters from where they are sold for mere $5 a kilo. The crabs are also barbecued or cooked on the spot. Although it’s interesting to see this place, I really doubt such practices are sustainable in the long run.

The crab market is a paradise for sea food lovers but even I found something nice to eat there- a barbecued aubergine. Sayak got some squid skewers and we both ate our lunch at the benches hanging precariously just above the sea.

We then moved further along the coast. Our next, very brief stop was the Kep beach, apparently used only by the locals. From there we carried on the same road, encircling the tiny Kep National Park: a few forest covered hills.

I wanted to see the salt fields Kep was famous for so we turned from the main road into a muddy and a very bumpy dirt road only to discover some brown, empty, rectangular fields. It clearly wasn’t the season for making salt.

SCENIC ROUTE TO THE PEPPER PLANTATIONS

We came back to the main road and then turned to another dirt road leading to La Plantation, the oldest and biggest organic pepper farm in Kampot. When I say the oldest I mean it’s just around 15-20 years old. Pepper was farmed extensively by the French but then all plantations were destroyed by the Khmer Rouge. We learned all of that and much more (including how to make black, white and red pepper) from a very informative free guided tour around the plantation.

After the tour we could taste all peppers grown at the plantation and of course buy some. It ain’t cheap but it’s certified organic and supposedly one of the best in the world so you pay for the quality. The plantation itself is set in a very picturesque location, on a hill overlooking a lake.

The road to the plantation led along the Brateak Krola Lake.  We heard it was possible to swim in it, however, the weather wasn’t so hot that we’d be dying to get a dip.

Both roads leading to the plantation (from Kep and from Kampot) were dirt roads in a decent condition. Getting there was just as good if not better than visiting the plantation itself. La Plantation wasn’t the only pepper plantation open for the tourists but it was the one most convenient for us to visit.

We left Kampot quite late in the morning so we didn’t really have time for a detour to the caves on the way back from La Plantation but I doubt we missed very much. It was a lovely road trip and we were perfectly satisfied with the day.