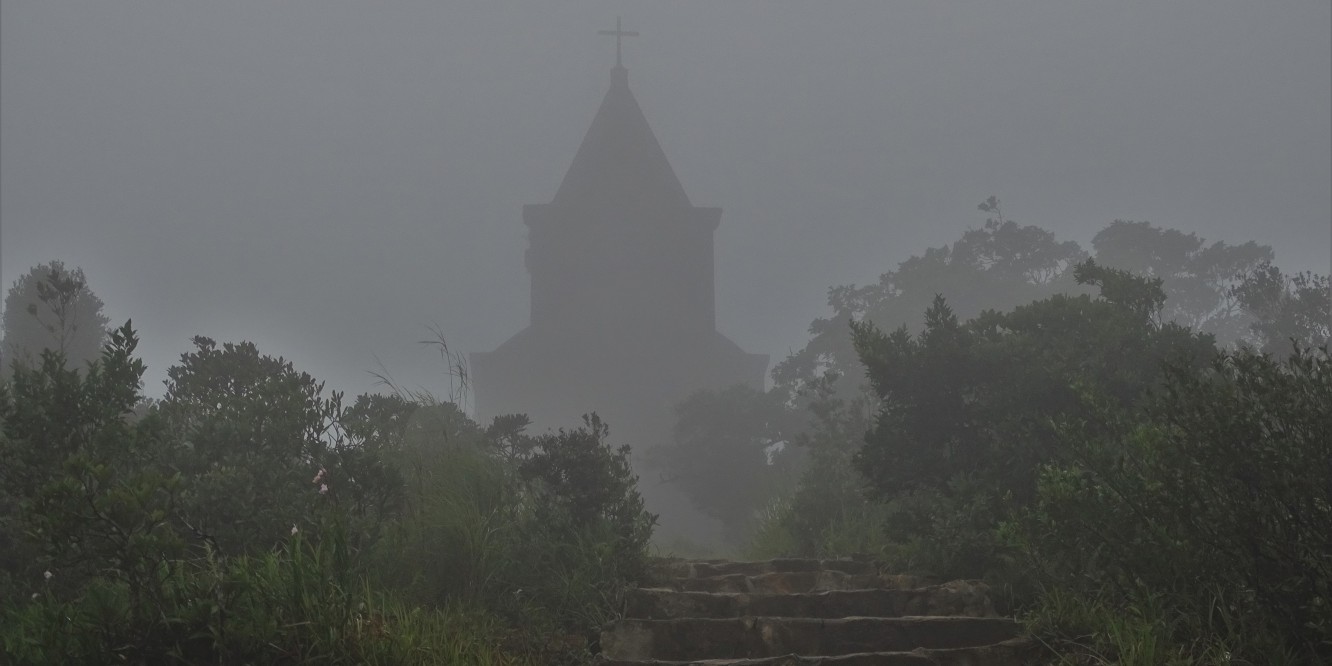 We reserved the following day entirely for the Preah Monivong National Park, also known as Bokor National Park. The only way of getting there is by riding a scooter/motorbike (or hiring a taxi). We were hoping to find some hiking routes on the top though we were ready for disappointment as the information we found online was scarce and not very helpful.

Surprisingly, the road to Bokor was brand new, in excellent conditions, empty and very safe. As we later learned, it was built by the Chinese investors who opened a hotel and a casino on the top of the mountain. The entrance to the park was completely free.

The road was really beautiful, with grand vistas at the sea and  Vietnamese Phuc Quoc island in the distance. We ended up 1000 meters above sea level almost seamlessly. The road wound so gently that even two people on a scooter could make it without any problems.

The higher we were getting, the cooler and cloudier it was becoming. As we were riding a scooter, we had to stop to put all the layers on to feel comfortable. We knew from the blogs it was going to be ‘chilly’ on the top but we didn’t quite realize how different climate was awaiting us. I was very glad I wore hiking boots and took long hiking trousers, a fleece and a rainproof jacket with me. I also took a bandana to cover my ears just in case it’d be really cold. All of those proved really useful.

A GIANT BUDDHA AND A TINY SUMMER PALACE

Our first stop was a tacky giant Buddha statue which served us as a view point. Just  below it, there was the Black Palace– in fact, just two rather small abandoned buildings made of brick which used to be the king’s unassuming summer palace. Unlike the Buddha statue area, full of Cambodians enjoying the weekend, the palace was completely empty.

The ubiquitous mist welcomed us on top of Bokor. We rode past a huge, kitsch new hotel-casino and carried on to see the most famous attraction – the old casino built by the French in the 1920s. Sadly, the old casino was recently renovated and turned into another hotel, losing all its charm.

Our best bet was to visit the abandoned church, a scene of heavy fighting between Vietnamese troops and the Khmer Rouge in 1979. The weather was on our side. A thick fog was enveloping the ruins, creating eerie atmosphere.

Sadly, all we could see from a nearby viewpoint was a sea of milk. There were a couple of smaller buildings scattered further down the road, alternately emerging from and submerging in the mist every few minutes.

We decided to take a large loop around the entire top of the mountain. At some point, it became extremely windy and it started drizzling. I felt totally like Scotland, especially being surrounded with the open grassland.

We didn’t really have time to ride to the Meditation Rock (a detour of around 9 km) but we stopped shortly at the Hundred Rice Fields. I still struggle to understand why this name was given to a grassland covered with hundreds of little pebble towers.

All the while we were searching for any traces of hiking routes. Beforehand, we found some information online that the maps and advice might be provided at the Bokor Higland Resort so I was glad to find that very resort at the entrance to the waterfalls we wanted to visit anyways.

The entrance to the waterfall cost $1 but came with a voucher for free water bottle. There was a short downpour exactly at the time we arrived. Luckily, we found a shelter in a nearby restaurant. We had some snacks while waiting for the rain to finish and then checked out the waterfall.

The access to the Popokvil waterfall was quite limited: we could see it only from above by peeking from the edge. We were told in the dry season it would be possible to walk down, though. The waterfall itself wasn’t anything spectacular but nice enough and definitely worth having a look if you are already in Bokor.

Just next to the parking site I finally saw an information board announcing that a ‘running trail’ was starting there. The board also mentioned hiking routes from the waterfalls to the Black Palace (3 hours linear hike) and 2 even longer hikes. I turned to almost the entire staff of the hotel, from the guard all the way to the manager in order to get more details. All in vain- nobody seemed to know anything. All I could extract from the guard was that the running trail was a bit further down the road.

Without much hope, we came back to the main road and followed it until it came to an end. There was another board indicating the start of a 3 km trail and a manned guard’s booth at the entrance. Sadly, when we tried to enter, we heard from the guard ‘no go’. That was the end of our hope of hiking in Bokor.

LAKE AND THE WAY DOWN

Instead of having a walk, we rode to see a small lake which looked quite atmospheric in the mist. We sat down for a while and then slowly made our way back to Kampot. We spend on the top of Bokor four hours in total.

As we already hired a scooter, we decided to check out rather small and sleepy night market close to the main bridge in Kampot and then rode to the old market area where a cluster of old colonial buildings overlook a quiet park. It was a nice place to hang out, have a meal or coffee in one of numerous restaurants.

How to get to Kampot?

You can get to Kampot from Phnom Penh by bus (faster) or train for a similar price ($6-$7). The A/C train is comfortable but very cold.
Bear in mind any bus would arrive in the old Kampot while the train station is located outside the town. Getting to the budget accommodation on the other side of the river from Kampot town requires a long walk or hiring a tuk-tuk.
Kampot is very close to Kep and a short drive to Sihanoukville further down the coast. There are numerous private minivans plying this route but they aren’t cheap. 2.5 h drive to Sihanoukville cost $6 – quite a lot for a distance of just 100 km.
There are also minibus connections to Ha Tien in Vietnam.

The only way of getting around (to the pepper plantations, salt fields or Bokor National Park) is by renting a scooter, hiring a tuk-tuk/taxi or joining an organised tour.

$7 train Phnom Penh- Kampot
$6 minivan Kampot-Sihanoukville
$5 accommodation in a simple hut with a shared bathroom at the riverside
$5 scooter rental for a day
$3 full tank of petrol
$2.50 tuk-tuk from the train station to the other side of the river
$2.50 ice-cream at La Plantation
$2 meal at a simple restaurant on the other side of the river
$1 coffee at a simple cafe
$1 entrance fee to the waterfall in Bokor National Park