Buon Ma Thuot is a rewarding off -the- beaten- track destination. This medium-size city located in the Central Highlands has all the advantages of a place unfrequented by tourists such as low, fair prices and authenticity. It certainly deserves a detour from the touristic trail for a few reasons: ethnic and cultural diversity, spectacular waterfalls and the best coffee in the country.

OFF THE BEATEN TRACK

We arrived to Buon Ma Thuot from the hustling and bustling coastal city of Nha Trang. Buon Ma Thuot turned out to be worlds away from the main ‘Lonely Planet’ trail. During the entire stay we noticed just five other Western tourists. The staff at our hotel didn’t speak even a trace of English but they were very nice and helpful. We communicated with them quite easily through Google Translator.

We arrived by a sleeper bus which had a drop- off included in the ticket price. It spared us the hassle of getting from the bus station to our chosen hotel. It was around lunch time when we arrived at our accommodation so it was too late to see any of the major attractions, all located out of the town.

Having just half a day left, we started with a visit to the Ethnographic Museum, recommended by a famous travel blog. The vast building of the museum located in a small park hosted a tiny, outdated and rather dull exhibition. Some of the video recordings with various ethnic minority rituals were interesting but the form of presenting the exhibits was quite boring.

The museum featured also a history section, which for some reason jumped straight from prehistoric to modern times. The Vietnam war period was presented through typical soc-realistic propaganda paintings which were for me the most interesting exhibits in the whole museum.

Buon Ma Thuot itself was relatively green (as for a Vietnamese city) but didn’t have any particular attractions to see. The most interesting sight we came across while walking around the city centre, was a golden monument of Ho Chi Minh surrounded with children.

ETHNIC MINORITY ‘VILLAGE’ ON THE OUTSKIRTS

We still had a couple of hours until sunset so I thought of checking out an Ede ethnic minority village called Ako Dhong (buon Co Thon in Vietnamese). It was located on the northern outskirts but still within a walking distance (3 km from the Ethnographic Museum). The walk along the main roads wasn’t too pleasant, though.

Once we got to the village, we became surrounded with the traditional, wooden houses. Unexpectedly, the buildings were all new and affluent. Some of them were used for tourism purposes but as it was already quite late all of the souvenir shops were closed. We walked around the village for a while, feeling a bit awkward taking photos of other people’s houses. 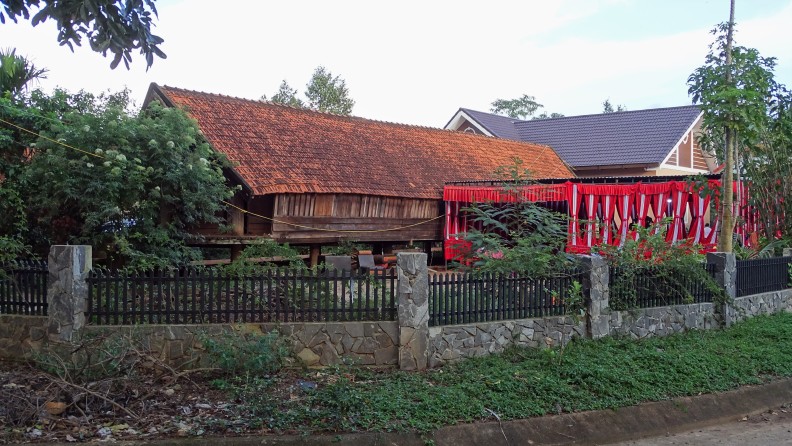 Buon Ma Thuot is famous as Vietnam’s coffee capital and indeed coffee there was ridiculously cheap, stronger and of higher quality than elsewhere. There were a couple of famous, themed cafes somewhere further from the city centre but we had neither time nor interest to visit them.

I was fortunate to stumble across two com chay (vegan eateries) in Buon Ma Thuot. One, called Com Chay Thien Y was directly north of the Ethnographic Museum. The other one (larger and much more busy), Quán Cơm Chay Giác Đức was in the city centre, on Hoang Dieu road.

Finding a place to have an evening meal wasn’t a problem for Sayak, either. There were plenty of  really cheap local eateries serving com tam, rice with grilled pork.

An elusive night market described in some blogs  simply didn’t exist but there were lots of night stalls and sidewalk eateries all over the city centre. We always stopped for my favourite che: an iced, sweet coconut soup with a variety of toppings, mostly beans or (vegan) jelly.