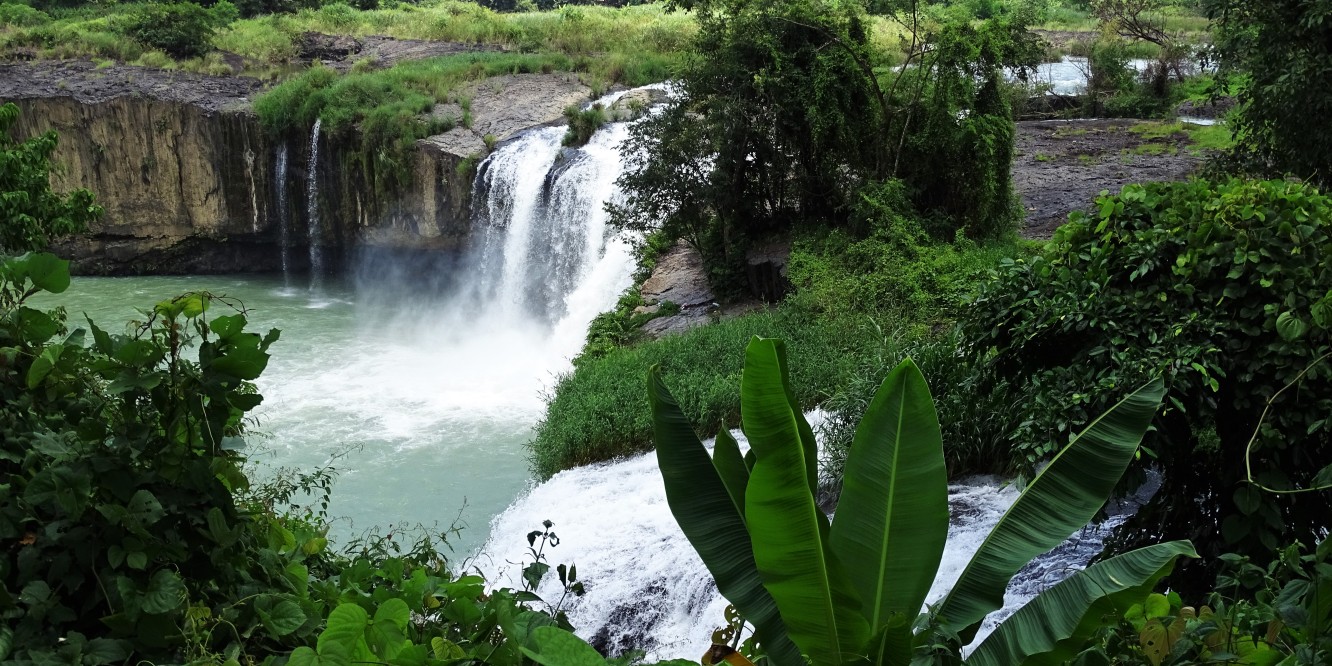 The trip to the Drei Sap and Drey Nur waterfalls was the definite highlight of the short visit to Buon Ma Thuot.  Dray Sap waterfall was easily accessible by public transport and- despite what you might hear- Drey Nur was within an easy reach as well.

GETTING TO DREY SAP

We took a local bus no 13 from the Ethnographic Museum, making sure first we were heading in the right direction. After getting off at the stop indicated by the ticket seller, we saw a road sign indicated that it was still 7 km to Gia Long (another, rarely visited waterfall) and just 1 km to Dray Sap. The entrance to the falls was ticketed but not expensive.

We had a short but very pleasant walk along the river and through the forest. At one point, we passed by a bridge which I knew from the blogs used to link Drap Sap and Dray Nur waterfalls. Google maps showed they were just a few hundred meters from each other. The bridge was officially closed when we saw it- there was a gate with a padlock on it. However, someone pried the metal bars so that one could easily squeeze through. Apart from the red signs in Vietnamese which surely warned against entering, there was no trace of any damage to the bridge. I sneaked through the broken gate and carefully entered the bridge.

I stepped onto that bridge just because I wanted to take a good photo of the Dray Sap waterfall from a distance. We asked a few people passing by if it was possible to cross the bridge but they all told us it was not allowed. Sayak was quite afraid to break the rules so we followed the main trail and reached the waterfall just a few minutes later.

Dray Sap was breathtaking: low but powerful, falling in a semi-circle into a large pool. During the rainy season, it could be even 100 meters wide. When we visited, it was much smaller but still very impressive. Sadly, swimming wasn’t possible at that idyllic spot.

It was a normal working day but there were a couple of locals having a picnic at the rocks beneath the falls. We didn’t feel like staying there for too long so we took a small path leading up the waterfall and saw a lovely landscape of a small rivulet winding through the meadows.

There was another Vietnamese family bathing in the natural pool above the falls. It was unbearably hot and I felt very jealous. I thought there must be more of those pools around so we crossed the rivulet and took a dirt road into the meadows.

Soon enough, we came across a much larger river.  I found an easy access to the river, took off my clothes and dipped in the river (not too far since the current was strong). With the exception of the local women and children on the other side of the river, we were alone so I felt bold enough to flaunt my bikini. We had our packed lunch seating on the rocks in the water. We left soon after the meal since there wasn’t much space to sit on the bank.

When we came back, the family at the pool was already gone so me and Sayak could enjoy it all for ourselves. There were no other people around. The water was crystal clear, cool and deep enough to have a decent swim. I was in paradise.

It was still early so we thought of paying a visit to Gia Long waterfalls as well. Just as we were passing by the closed bridge, we saw a large party of clearly local people who leisurely crossed it and disappeared on the other side. The bridge didn’t collapse under ten or so of them so it wouldn’t underneath us either. We assumed those people went to the waterfalls which finally encouraged Sayak to follow their footsteps.

The path was quite overgrown on the other side but clear enough to be able to follow it. We didn’t walk for more than 5 minutes when we saw a low wooden fence and… an open cafe! There were no people around apart from the staff who completely ignored us when we crossed over the low wooden fence. We assumed that trespassing must have been a common occurrence.

We asked the man working at the cafe for the directions to Dray Nur. It turned out that all we had to do was to follow the only path leading down. After two minutes Dray Nur– an even larger, breathtaking waterfall- was right in front of our eyes.

We crossed a smaller bridge which looked much more dilapidated than the closed one and watched an enormous pool of water below the falls. There were quite a few tourists around, including two Westerners. This fall could be admired from many angles and had a beautiful surroundings but there was no place to swim anywhere nearby. Therefore, I couldn’t really decide which of the falls did I like more.

I was glad we risked getting through to Dray Nur. The only alternative route to Dray Nur required a 1.5 hour long drive detour and there weren’t any buses running in that direction! Quite simply, we would have never seen Dray Nur without breaking the rules.

Once we were ready to go back, we waited until the tourists were gone from the cafe and came back the same way we entered. It was getting late so we had to skip Gia Long waterfalls altogether. We heard it was much smaller and full of snakes so we didn’t regret it much, although I had no doubt we’d have been totally alone there.

How to get to Dray Sap/ Dray Nur?

Take a bus no 13 towards Krong No from the bus stop to the west of the park where the Ethnographic Museum is located (on Le Hong Phong street) or from the roundabout with the Victory Monument.
The ticket costs 20 000 VND [July 2018]. Ask the ticket seller to tell you when to get off for Dray Sap.

When you get off, follow the road further on until you see it’s forking. Turn left to Dray Sap once you see the sign board. The road will take you to the ticket entrance and from there a clear path will lead to the falls and beyond. The entrance to Dray Sap costs 40 000 VND [July 2018].

If you want to risk crossing to Dray Nur, use the closed bridge on the river which you will pass by on the way to Dray Sap. Use maps.me or google maps to head in the direction of the Dray Nur (left) until you reach the wooden fence. From there, there is just one path leading to the falls. You’d then have to walk the same way back.

The last bus leaves around 4-5pm: best check with the ticket seller once you get the bus to the falls.