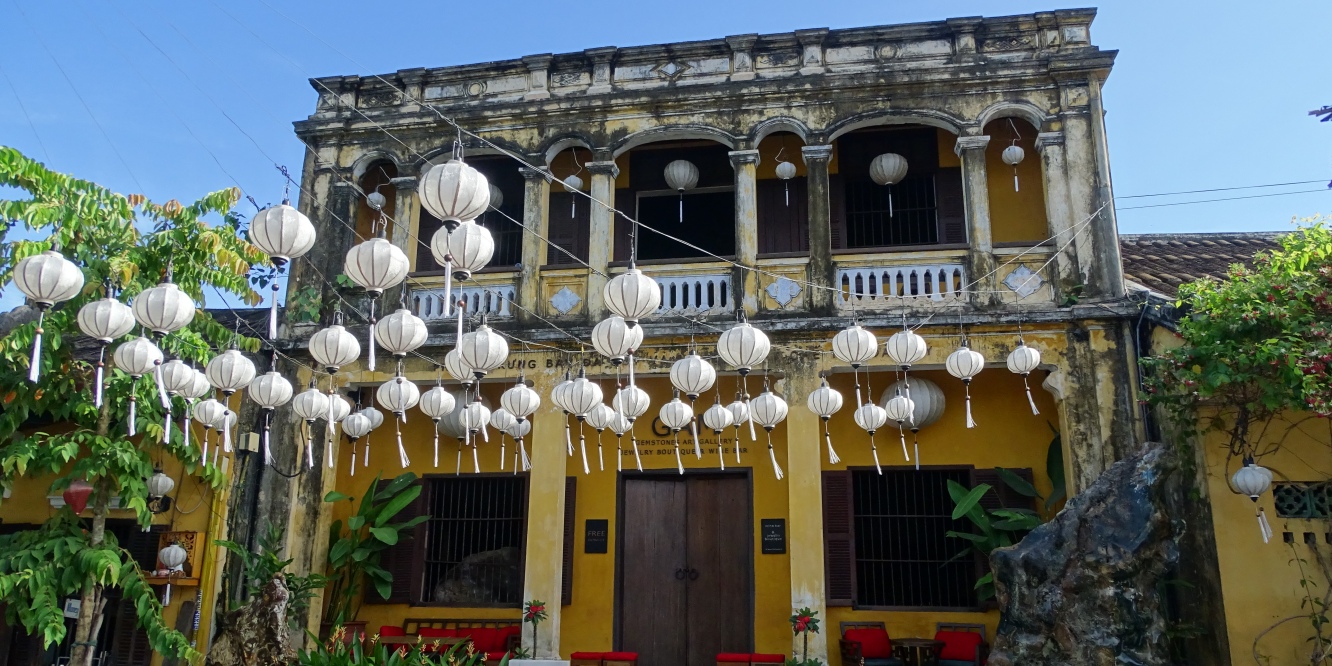 Hoi An is one of the top destinations in Vietnam and it shows. Expect crowds, high prices and dishonest sellers. It is a typical tourist-geared town. If you can cope with all of that, Hoi An would reveal itself as a true pearl of South East Asia.

This unique merchant town, full of beautifully renovated historical houses, assembly halls and temples is unlikely to leave you indifferent. The architecture of the old town is a real marvel so no wonder it was enlisted as a UNESCO Heritage Site. Hoi An looks equally beautiful by day and by night, when hundreds of paper lanterns are placed on the river or hanged across the width of the streets.

Hoi An is just a cycling distance from An Bang- a quite decent beach. It is also a perfect base for one day trip to My Son (ruins of the city built by the ancient Cham civilisation), Marble Mountains (caves with Buddhist temples) or Ba Nang Hills (with the iconic bridge held in giant hands). Last but not least, Hoi An is famous for its sophisticated cuisine. In a word, it would be a shame to miss it even in the shortest itinerary.

From Kon Tum to Hoi An

It took us 8 hours to get from Kon Tum in the Central Highlands to the major coastal city of Da Nang. We didn’t mind it since the views while crossing the mountains were really amazing. This being said, we heard that a smaller road leading directly to Hoi An from Kon Tum was even more picturesque, making it ideal route for the bikers.

Da Nang to Hoi An bus

Once at Da Nang bus station, we ignored the touts trying to sell us the taxi services and switched to a local bus to Hoi An. The bus had to cut through the traffic- congested city so it took a while to reach Hoi AN.  At least  we could see famous karst rocks of Marble Mountains on the way. Da Nang is a huge city so I wouldn’t recommend to stay there- Hoi An isn’t far away and is incomparably nicer.

The thing that struck us the most when we arrived on the coast was the weather- it was extremely hot and sunny. Central coast of Vietnam has its own climate and while the rest of the country experiences wet season, this strip of land stays sunny and very hot.

Hoi An on a budget

Hoi An is probably the most touristic and by far the most expensive town in Vietnam, even more pricey than the capital Hanoi. We gave up the idea of staying within the historical city centre straightaway and found a room roughly within our budget in Tan An area.

Tan An is around 1.5 km from the old town but within a walking distance from the bus station. Even though 1.5 was nothing for our standards, we were very grateful for having  free access to the guest house bicycles. We had the best of two worlds: peace and quiet away from the crowds but as well as cheaper prices in shops and restaurants. We were an easy bicycle ride both from the centre and the beach. We even discovered an old cemetery and some peaceful pagodas within a walking distance.

During my stay in Vietnam, I had learned to search for ‘an chai (vegetarian) near me’ in Google but in Hoi An posh vegetarian restaurants for tourists dominated. Eventually, I found one genuine, budget com chay (vegan buffet) and ended up dining there twice a day even though it was quite a ride from where we stayed. This simple place with plastic chairs and delicious food was called Tam Quang Minh and was marked on Google maps.

It soon became apparent that even finding a fairly priced bottled water would be a challenge in Hoi An. Luckily, a small shop inside the house neighbouring with our guest house sold food and drinks for a genuine price.

We spent our first evening hanging out with our Catalan friend (who just happened to be in Vietnam at the same time). We never stayed in a hostel in Vietnam so it was quite a discovery that every  hostel in the country offered free fresh beer (very diluted) during the happy hour. After a bit of drinking, the whole party went out to explore Hoi An by night.

Hoi An by night

I soon realised that Hoi An was by far the most beautiful town I’d seen during the whole trip in South East Asia. The old, historical buildings were renovated and at night beautifully illuminated.

We left our bikes at the hostel and we didn’t regret it since bicycle parking was charged all over the old town. The narrow lanes of the old town were crowded with international, main-stream tourists. Every single building in the old city was converted into a souvenir shop, a hotel or a restaurant which I found rather sad.

We went to the riverside and watched tourists taking boat rides and placing paper lanterns on the water. Then, we crossed the bridge and explored the night market in search of food. It was full of highly overpriced, tiny-portioned snacks. We had a couple of different snacks and eventually satisfied our appetites. By the time we finished roaming around (at 9 pm), all restaurants were closed. It was a relief for me, since I could only imagine the bill in one of the riverside restaurants.

The following day we experienced two different scams. We were just about to enter the Hoi An covered market when we were stopped by a British scammer who announced that we won an attractive prize. I was curious how the scam worked so we went with him and wasted over two hours being convinced to pay a hefty fee for a lifetime access to five-star holidays. Unsurprisingly, the prize itself (weekend in a 5 star hotel in a chosen city) also required paying some money. I wasted the good part of the day for getting acquainted with this sophisticated scam.

On another occasion, I stopped to take a photo of a temple when a Vietnamese woman wearing a conical hat and carrying a pole with baskets full of fruit ran towards us.

Before I could react, she transferred the pole to my shoulder and put the hat on my head. Since I was already framed, I told Sayak to take photos of me and a few other sellers who were with her. The woman didn’t ask for money directly- she just wanted to charge us exorbitant price for her fruit. At first I refused but she kept on insisting, complaining of how heavy the pole was. We settled for the amount which was double of the normal price.

It was just a couple of times we got cheated in Vietnam and on both occasions it wasn’t anything serious only because we fought against injustice vehemently. In a place so full of tourists, it’s advisable to be extra cautious.