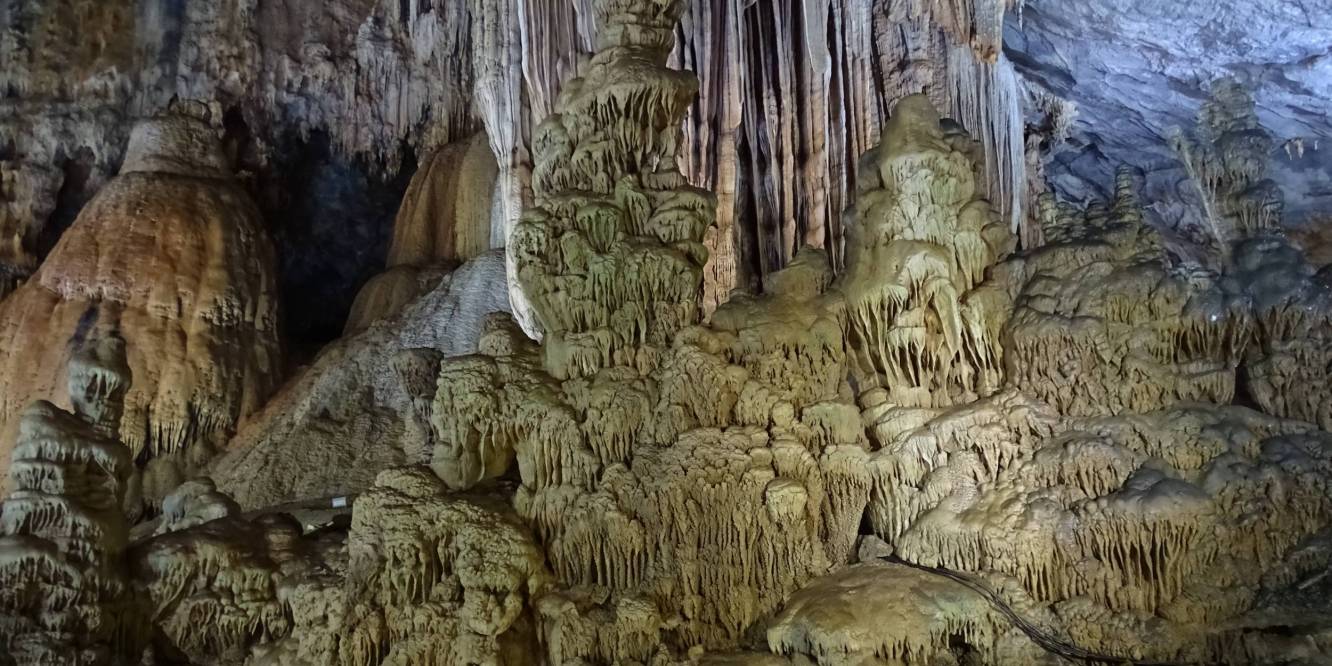 Phong Nha Ke Bang National Park is undoubtedly one of highlights of any trip to Vietnam. If you have a few hundred dollars to spend, you could go for an adventure of your lifetime, trekking through the jungle to camp inside gigantic caves. But even on a limited budget, you would be certainly impressed by the caves open to the general visitors and by the fantastic landscape.

Phong Nha town is just one street filled with hotels, hostels and restaurants. The town was created solely for tourism so you could forget about finding a local budget eatery or even a fresh market there. It is a relatively expensive place to stay.

We arranged with the owner of our guesthouse in Hue a pick up for a cheap bus to Phong Nga Town. We waited for the bus, chatting with the receptionist. The bus was late but we started worrying only when the delay reached half an hour. 45 minutes later, the owner enter and started shouting in Vietnamese at the receptionist. As it turned out, the driver who was supposed to pick us up simply forgot about us. Our bus had already left but since it was the bus company’s fault, there were going to take us to Phang Nga Town by another bus and then a… taxi.

We were highly skeptical but had not much more choice than to believe it. We got on a bus heading somewhere north and got dropped on the highway at the company’s office in the complete darkness. To our surprise, just as promised, a pre-paid taxi turned up shortly. Within half an hour of a crazily fast journey through empty countryside roads, we were in front of our hotel in Phong Nha Town. We were stunned by the amount of effort and good will so many people made to assure we reach our destination.

Phong Nha Town on a budget

We stayed in a hotel which was pricey in comparison to the previous accommodations in Vietnam, especially considering the room didn’t have windows. At least it was new, spacious and- unusually for Vietam- the price included breakfast.

As for eating out, we were choosing the most rudimentary eateries which unfortunately still had tourist-oriented prices. Finding vegan options wasn’t an issue. Sayak’s favourite backpackers’ diner was the one serving grilled pork, though. The meat-eaters could probably eat the cheapest at the street stalls on the edges of the town where the grilled meat was sold in the evenings.

Doing shopping in Phong Nha Town was extremely difficult since there were no local shops or markets in town. Renting a cheap scooter or a bicycle, on the other hand, couldn’t be easier.

It would be a big mistake to save money on cave tickets as they are exceptionally beautiful. A cheaper alternative would be enjoying the landscape by cycling or (a bit more expensive), biking.

It was unfortunate that our first day in Phong Nha was Sunday. It meant that the usual crowd of Western tourists would be topped up by masses of locals. Considering the huge distance to the caves and lack of the public transport, we had no choice but to rent a motorbike at our hotel.

We drove out of town, turning left on the highway. We crossed the bridge and carried on until we reached the national park. Everywhere around us there were beautiful karst rock formations covered with greenery.

Skipping the Dark Cave and the Mooc Springs

The first cave on our route was the Dark Cave, attracting mostly Western tourists with the promise of an adventure. The cave is full of cold mud and is devoid of lighting. The only way to enter it is through a zip line and after leaving, one could play in the river.

I was considering trying it out, despite the fact it was quite expensive for Vietnamese standards. The crowd of young backpackers put me off immediately. We were advised by the crew to come the next morning due to lack of available tickets.

It was hot and sunny and I was dying to have a dip in the water. We were willing to pay for the entrance to the Mooc Spring which was just a short distance from the Dark Cave just for the sake of having a swim there. However, the place was closed due to wet season.

After a short drive, we reached the famous Paradise Cave deservedly listed as UNESCO Heritage Site. As expected, it was quite crowded. We paid for the parking and had a short walk to get to the cave’s entrance. We climbed up the stairs and went through an unassuming entrance into a surprisingly huge cave.

The scale of the cave was impressive but the fact it was packed with people robbed it of much of its appeal. We moved along the wooden platforms for a kilometer or so, watching the illuminated rock formations, including one resembling a rong– ethnic minority hut.

Beyond the Paradise Cave

99% of tourists don’t venture beyond the Paradise Cave. Completing the loop around Phong Nga Ke Bang National Park is a great way of escaping the crowds. For the rest of the day, we could enjoy empty roads and beautiful vistas.

We arrived at Phong Nha Botanical Gardens around 3 pm. We had a quick lacklustre lunch at a cafe and hurried to explore the surroundings. The entrance fee was really low considering there were two swimming holes in the park.

The ‘botanical gardens’ were in fact it a chunk of the national park accessible to tourists. There were three walking paths to choose from: the shortest one led straight to the waterfall, the middle one made a small loop ending also at the waterfall and the longest one was a 2.5h long walk around its perimeter.

We wouldn’t be able to complete the route number 3 before dark so we chose the route no.2, passing by a swimming hole. Soon enough, we saw the hole: it was already in the shade but we had it all for ourselves. It was a small but deep hole on a stream with refreshingly cool water.

We hanged out there for a while and then carried along the same route, leading slightly up and down through the jungle. Finally, we reached the bottom of the waterfall with the second water hole. I waited for a while until it emptied and had one more dip.

The path led steep up through some ladders and rocks. There were quite a few people just below the waterfalls, Westerners and locals alike. Despite the waterfall didn’t carry much water, it was quite high and pretty. I climbed up the rocks to get to the top of the falls. Beautiful views at the forest and the mountains opened from there.

It was a short but lovely walk from the top of the waterfall, along a river, to the entrance. We came out just before the closing time but I was sure there were still quite a few people inside.

We had to speed up as it was becoming late and we still had a long distance to cover. The last fragment of the road was a bit more steep and winding but the views were amazing throughout. Even when we left the national park, lots of karst formations were still scattered here and there. The sun was setting when we returned to Phong Nha Town.

How to get to Phong Nha Town?
Only tourist sleeper buses, including the open ticket buses reach Phong Nha Town. It takes 10-11h from Hanoi and 5h to Hue.