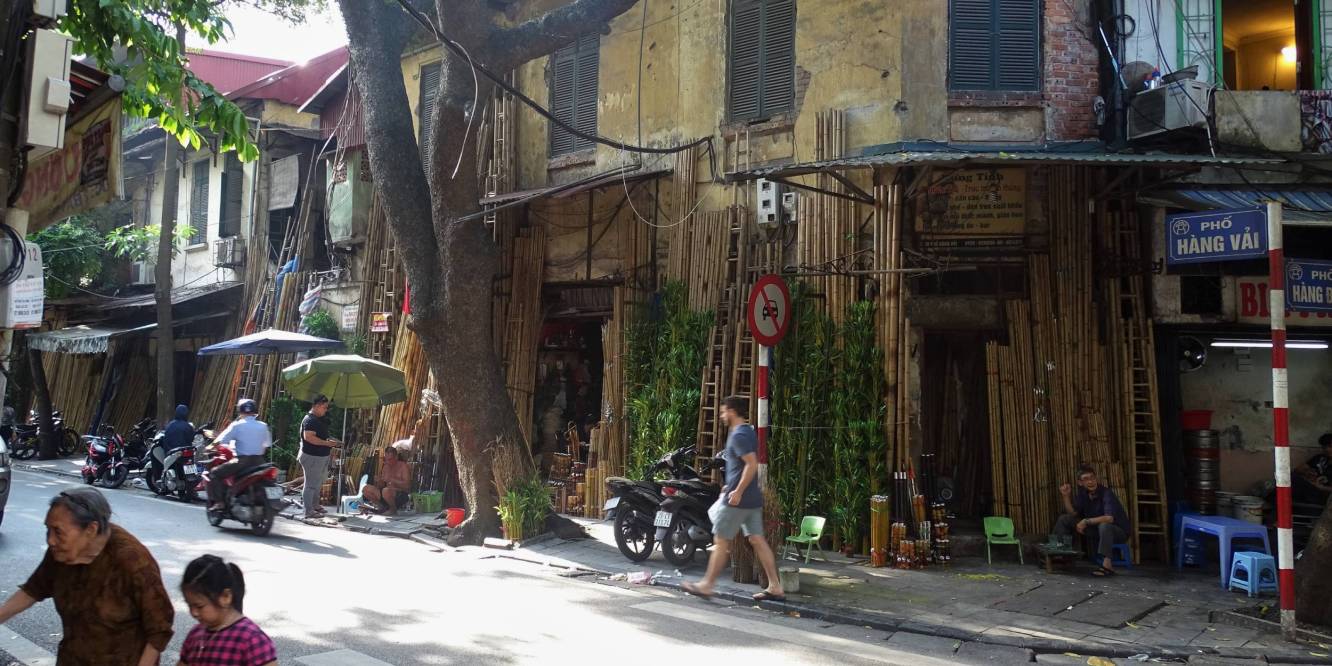 Seeing Hanoi old town unhurriedly would take two days. Devote the first day for exploring the Old Quarter, French Quarter and Hoan Kiem Lake. The second day could be reserved for the area near the West Lake, north of the Old Quarter, including such pearls as Temple of Literature and Ho Chi Minh’s Mausoleum.

We spent our first day walking through the streets of the Old Quarter. Historically, each street was reserved for a particular trade. This division is still visible today, even though numerous hotels, cafes and restaurants somewhat disturbed the old order.

I couldn’t miss visiting old merchant houses and pagodas. The most important place of worship in the Old Quarter is Bach Ma temple – one of the four sacred city temples set in cardinal directions. Its main deity is a white horse set on a red-golden altar.

I did enjoy the visit to the ‘ancient house’ on Ma May stree: a long building with an inner courtyard. The house comprises of the living quarters, kitchen, prayer room,etc. A short description of each room is available. If you saw merchant houses in Hoi An, that one would not be very much different.

We also had a walk along the Hoan Kiem Lake -the beating heart of the city and a favourite spot for the locals to relax, exercise or socialise. Ngoc Son temple, one of the city landmarks, is located on the lake. You can get there through a red, wooden bridge. Despite the entrance is ticketed, expect it to be crowded.

Like many Vietnamese places of worships Ngoc Son blends the elements of Confucianism, Taoism and Buddhism. There aren’t that many exciting things to see inside apart from a giant, stuffed turtle, supposedly caught in the lake.

The area adjacent to the lake is called the French Quarter as it is peppered with elegant colonial style buildings. Large, grey-stone neo-gothic cathedral of St. Joseph looms at the west bank of the lake while the richly decorated French opera house stands proud a short distance to the east of the lake.

Around the West Lake

We started the next day with visiting the Temple of Literature. The entrance fee isn’t excessively high, considering the size of the grounds. Temple of Literature isn’t a single building but a large compound set in a symmetrical style with large courtyards and ornamental gates leading further and further inside.

The main temple lies at a pond full of carps. Both sides of the pond are lined with rows of stone turtles (symbols of wisdom). Each turtle carries a stela with names of successful candidates for official posts. Those were inscribed in the time when Vietnam was ruled by the emperors. The temple itself is devoted to Confucius.

On the other side of the street, there is a small pond with various workshops around it. The workshops allow tourists to try making traditional craft for quite a hefty fee.

After visiting the temple, we walked to the Ho Chi Minh Mausoleum. We really wanted to see the mummified body of Ho Chi Minh- a communist leader revered by many Vietnamese for his contribution in gaining independence from the French and his victory over the Americans. Unfortunately, we missed the opportunity to see the mausoleum before 11 am, when it closes to the visitors.

There was a strong police presence around the mausoleum and guards in white uniforms held watch in front of that monumental, soc-realistic grey cube.

It is possible to enter the Presidential Mausoleum Park nearby including Ho Chi Minh’s small, wooden House on stilts, Presidential Palace and a reconstruction of an ancient One Pillar Pagoda. The entrance is paid.

The mausoleum is just a short walk from the West Lake. 11th century Taoist Quan Thanh temple stands just on the right side from the lake. It is one of the four sacred temples of the city (guarding the north) but is incomparably less busy than the Ngoc Son. The most striking element inside is a large, seated bronze statue of Tran Vu deity.

The more visited Buddhist Chua Tran Quoc temple is located on an island connected with the main land with a causeway. It is one of the oldest temples in the country, however, it went through two major reconstructions in 15th and 19th century. Personally, I found it less impressive than Quan Thanh.

If you start walking the causeway between two lakes, don’t miss the opportunity to try bo bia. There are plenty of hawkers selling those very cheap and tasty sweet, coconut pancakes.

Since we walked already half the way up the causeway, we decided to encircle the smaller, eastern part of the lake. Soon after passing an inhabited island, we stumbled across a small market with the prices lower than in the Old Quarter.

We carried on to the Thang Long Imperial Citadel which was closed by time we reached it. It looked smaller and less impressive than the one in Hue so we didn’t regret missing the opportunity to visit it.

Trying to find a bus stop, we ended up by chance at… Le Nin (that’s how Vietnamese spell it!) park with a Lenin statue! Local kids were skate boarding in front of the statue.

To little time, too much to see

Our visa was about to finish so, following the advice of our Couch Surfing host Thuy, we went to Laos, only to come back to northern Vietnam for another two weeks in September.

How to get to Hanoi?
By plane
Hanoi airport has direct flights to multitude of destinations in Asia but no other continent. Budget operators fly to Bangkok, Kuala Lumpur and Penang, Singapore, Siem Reap, Yangon, Hong Kong, Tokyo and Osaka, Taipei and- from 2019 also Kolkata and Delhi.

If you want to jump from south to north of the country, budget domestic airlines might be an option. Expect to pay at least 1 000 000 VND for a flight from HCMC to Hanoi if you book a few months in advance. That’s cheaper than the train- makes sense if you travel light as you’d need to pay extra for the check-in luggage.

You can get to Hanoi airport by a regular public bus for just 5 000 VND. You’d need to change the buses, though as numbers 7 and 17 don’t stop in the old town (starting at Kim Ma and Long Bien stations respectively). Use the Bus Map app to help you to navigate.

By train
The main Gia Lam station is just a short walk from Hoan Kiem Lake.
It is divided in section A for southbound and B for northbound trains.
The sleeper train is the most comfortable way (but not the cheapest) to get to Ha Noi from any of the coastal cities such as Hue and Da Nang (13-15 hours journey). Nha Trang and HCMC are a bit too far to make the non-stop travel worthwhile (26 and 33 hours respectively).
Hard-sitter, A/C train from Ninh Binh or Vinh would be cheaper than a bus.
Located very nearby station B serves trains to the north, most notably to Lao Cai. Overnight hard sleeper would costs at least 350 000 VND (bus could be 100 000 VND cheaper).

By bus
Ha Noi has a few bus stations connecting the capital with different parts of the country. The most useful would probably be My Dinh.
My Dinh serves the north with destinations such as Dien Bien Phu on the border with Laos (8h), Lao Cai close to SaPa (10h) and Ha Giang in the far north (8h)
Southern Terminal is for very long-distance buses such as to HCMC(37h!), Vientiane in Laos (24h!) and more reasonable Hue (14h) or Da Nang (16h).
Gia Lam bus station serves Hai Phong (2h) and Halong (4h) plus Lao Cai.
You can arrange bus to China via travel agency.