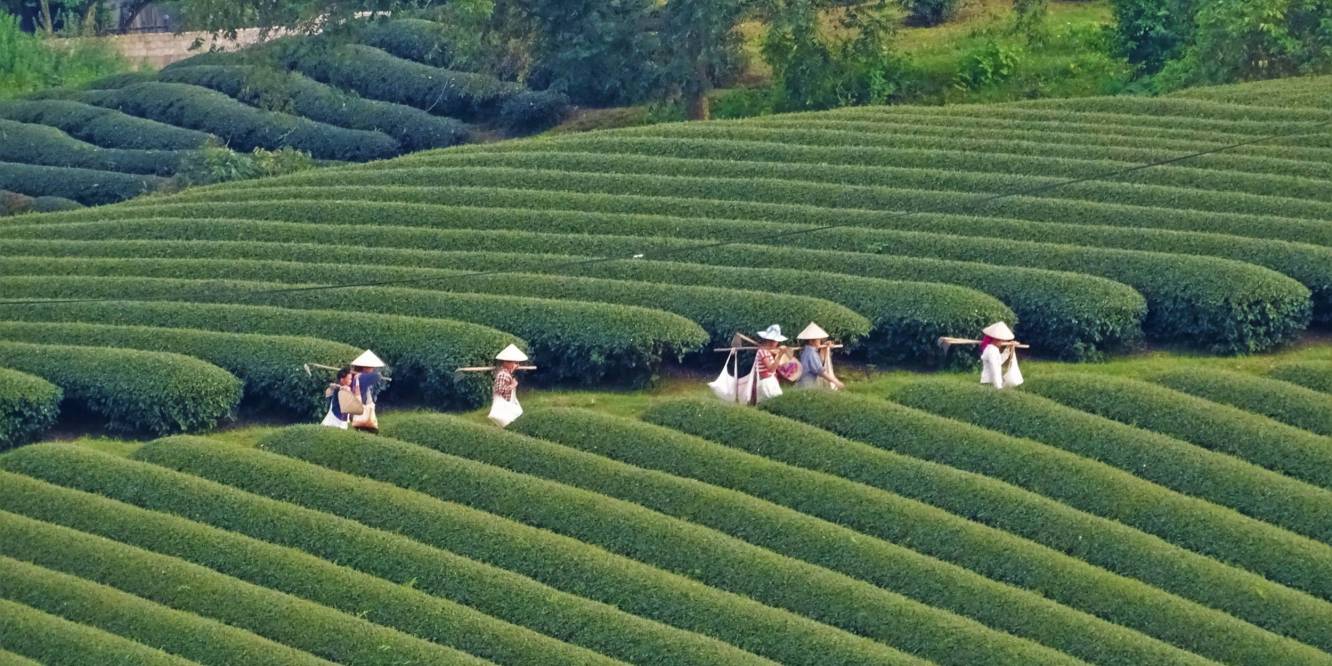 Moc Chau is a sleepy town located in the heart of the Vietnamese tea country. Apart from green tea, it is also famous for its dairy cows – quite unusual sight in South East Asia. Due to the beautiful mountain landscapes and low popularity among tourists, it’s a perfect place to relax for a couple of days. Local people are very welcoming and friendly so it’s also one of the best places to soak the local culture.

From Hanoi to Moc Chau

Our next destination after Hanoi was Moc Chau- located between the capital and the Laotian border. Once we got to My Dinh station in Hanoi we passed by a group of touts and walked straight to the counter to buy a ticket for the cheapest bus to Moc Chau. Nevertheless, we still had to argue about the price since there was a discrepancy between what was displayed on the ticket booth and what we were asked to pay.

The bus was a typical Vietnamese AC sleeper. The only difference was that it got packed to the point that not just the seats but also the passageways were completely filled up. We got seats at the back of the bus which turned out to be a nightmare for me.

Perhaps due to lack of fresh air, staying on the back in reclining position or the combination of all of these, the winding road through the mountains made me very nauseous.

Our homestay and lovely locals

We were dropped off on the main highway, far away from our idyllic homestay among the tea gardens. It was middle of the day but we trod on with the backpacks towards the town, not really sure about the exact whereabouts of the homestay. We asked for the directions at the first crossroads and got contradictory answers as there were a couple of guesthouses with the similar names.

One of the men we chatted with invited me to get on his bike. I suspected he was going to charge me a lot for that. I was wrong. He not only dropped me off one kilometer down the road but even came back for Sayak. Then he showed us the way to the already visible house and drove off. That was our first taste of just how friendly the people in the mountains were.

Our homestay was indeed a pearl of a place: a simple house surrounded from both sides with hillocks covered with miles and miles of tea gardens. Our host didn’t speak a word of English but was super friendly and talkative. He offered us tea and Sayak got a chance to smoke a huge tobacco pipe commonly used in the north. He started coughing after having just a puff- it was seriously strong stuff!

We just wanted to have a walk through the gardens and take some photos when a Vietnamese guest turned up. He was an amateur photographer from Hanoi and he knew Moc Chau like the palm of his hand. He spoke fluent English so at last communication wasn’t a problem. He convinced Sayak to rent a motorbike (a private bike of the host) and join him for a tea gardens photo shoot. The problem was, the motorbike wasn’t automatic and Sayak had no idea how to change gears. His new friend assured him that it wouldn’t an issue and after a 5-minute trial, we were on the road.

The road leading up and down the hill proved rather challenging due to numerous potholes and trucks which were pushing us to the hard shoulder. Soon we turned from the main road onto an upslope dirt road full of small rocks and pebbles.

The experience of Ko Tao accident taught me that we were in trouble. Yet, I carried on shooting a video with my camera. 30 seconds later, me and Sayak were both lying on the ground and the luckily unscathed camera was pointing at the sky. As usual, I had just a few very minor scratches while Sayak was bruised and he was bleeding. Thankfully, it wasn’t anything serious so after cleaning the woulds with water he was ready to go.

Minutes later we were on a top of a hillock with 360 degrees view at the tea plantations and at the mountains further in the background. We could see from above a few shepherdesses watching over their cows. It was indeed a great viewpoint well worth taking the risk.

Luckily, our host was very relaxed about the scratches on his bike and more concerned about scratches on Sayak’s body. After dressing the wounds, we left to have a dinner with our new friends. Dining with the locals is great since they really know what to order. I was impressed with the amount of vegan dishes they procured. I somehow managed to mistake bottles with the local rice wine for the drinking water. I burned my throat on that strong but rather tasteless beverage.

Next day I woke up very early to see the sunrise. It was dark and cold when I left home. I took a shortcut through the waist- high tea shrubs to get on top of the nearest hill. It wasn’t a good idea- within 5 minutes, my boots and clothes waist down were completely soaked.

Unsatisfied with the view from the hillock, I carried on to a wide path which took me further and further among the tea-covered hillocks. It was almost bright when I climbed the highest hill in the vicinity which happened to serve as a cemetery. The view of the sun rising above the even rows of tea bushes was beautiful and totally worth waking up early.

We still had to get breakfast in the village about a kilometer away from the homestay before taking a bus to Dien Bien Phu. I walked from stall to stall, asking about vegetarian food. A woman selling noodles at her tiny outlet urged me to sit down. I watched her rolling and steaming the fresh noodles for me. She served them with some herbs, soy sauce and pickles. At the end, she asked me and Sayak to pose for a photo with her family. I couldn’t help loving those people.

Our hosts arranged for a taxi to the main road and a minibus ticket to Dien Bien Phu. The minivan with no AC didn’t give me any trouble even though the journey was much longer this time. The mountain views were splendid.

How to get to Moc Chau?
You can get to Moc Chau by bus from Hanoi (4h), Son La (3h) and Dien Bien Phu (6-7h). The buses stop on the main highway, a few kilometers away from the town centre so you’d need to take a taxi or hitch-hike to get there.