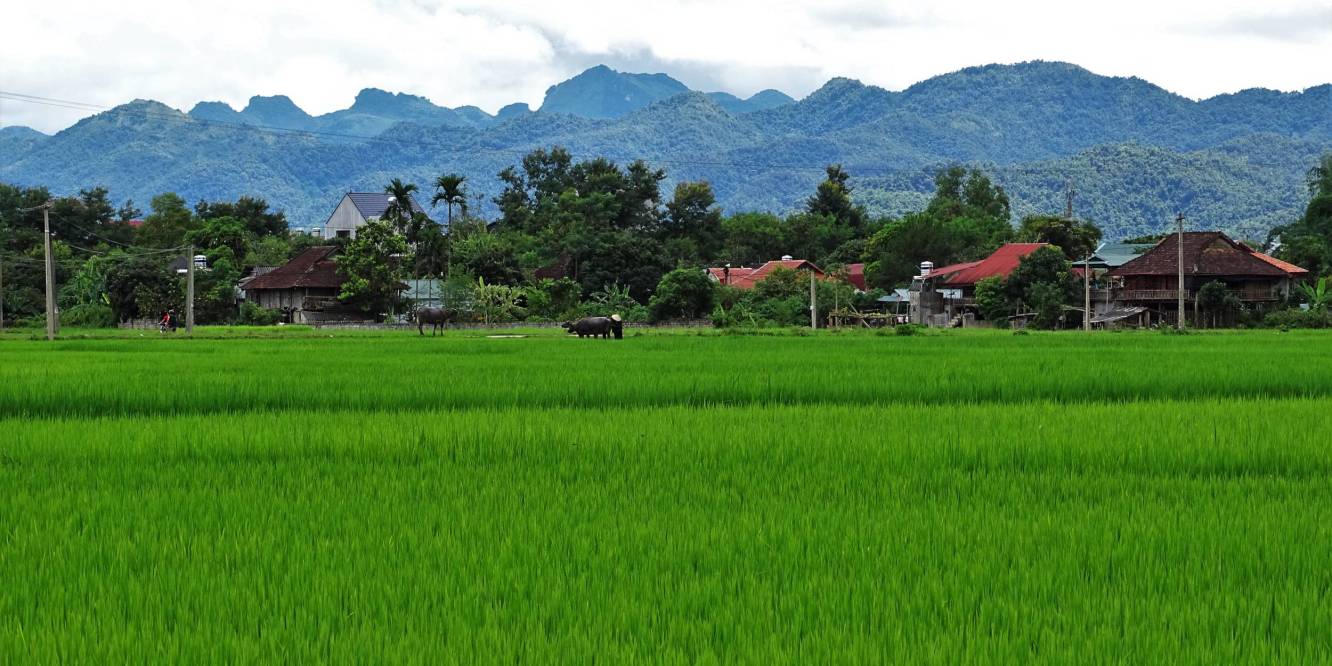 Dien Bien Phu is another underrated destination of the Vietnamese north-west. It is a small town located in a huge valley surrounded with imposing mountains. The adjacent villages, inhabited by the ethnic minorities who still keep their traditional hairstyle, are full of old houses. There isn’t much specific to see (unless you’re a military history fan), but that’s one of the places where you can really enjoy the countryside and lyrical landscapes. Dien Bien Phu might be too much of a detour to be an attraction on its own but it’s definitely worth to stop over on the way to Laos.

Dien Bien Phu on a budget

We stayed in a good quality, affordable hotel located very conveniently just in front of the bus station. We soon discovered that the shops and eateries around the station have higher prices than those further in the town.

A routine Google search for vegetarian eateries came with just one result: a kind of trendy place catering for tourists. It was expensive but, unlike Hanoi restaurants, the food wasn’t worth the money. It made much more sense to relish the selection of vegan dishes at any of the com bin dan (cheap buffet-style eateries).

The food such as fruits or snacks sold on the streets and at the fresh market were really cheap in Dien Bien Phu.

In and around Dien Bien Phu

We woke up early to visit the local fresh market, (not to be confused with the maze of stalls near the Victory Monument hill).

In order to get to the fresh market from the bus station, turn your back to the city and face the fields. Walk to the left, having the fields on your right hand side. Once you reach Muong Thanh bridge, simply cross it to reach the market.

The market was a fascinating place, where members of White Tai ethnic minority were selling their produce side by side with the ethnic Vietnamese. We browsed the market for food and bought lots of exciting snacks which served us as breakfast and lunch.

Our next target was an ethnic minority village Ban Men, lying 6 km outside Dien Bien Phu. There was a local bus we could catch but the driver asked us for a suspiciously high price. Instead of taking a bus, we negotiated a fair price with a xe om (motorbike taxi) driver. He agreed to take both of us on his bike which was certainly illegal but much cheaper than getting a separate one for each of us. The driver drove fast like the wind so in a few minutes we got dropped off at the gate to the village.

We walked among verdant green rice fields while the mountains provided spectacular backdrop. The Ban Men village turned out to be really pretty as well, bursting with wooden, stilted houses.

We heard the traditional music as soon as we entered the village. The sound led us to the communal hall. A group of Tai women in their traditional costumes was dancing, holding hands, while a camera man was filming. They were most probably shooting a promotional tourism video which gave us a chance to enjoy a free show.

Astonishingly, we were invited to join the dancing and feature in the movie. The benefit was mutual: they had foreign tourists in their video, while we had an unforgettable experience.

The dance itself seemed uncomplicated but proved to be a bit tricky. It involved jumping over the constantly moving sticks held by the villagers at the ankle-height. We did quite well and were ready for more challenges when suddenly, a downpour came.

We found a shelter and had a nice chat with the ladies, who obviously didn’t speak any English at all. When the rain stopped, we waved them goodbye to walk a bit more through the countryside.

I spotted a military cemetery in the distance and thought it wouldn’t hurt to see it. Just next to the cemetery, there were some ethnic minority tombs with various totems. Sadly, we didn’t know the meaning of any of them.

The military cemetery comprised of rows of uniform tombs with bunches of plastic yellow flowers decorating each of them. The cemetery was set on a slope with a great panorama at the forest-clad mountains.

I caught a glimpse of a regular cemetery behind the wall, so I jumped over the wall to have a better look. There were some more tribal tombs and great views at a valley full of all wooden houses set among the green fields.

A long walk through the villages

We decided to walk all the way back to Dien Bien Phu but instead of taking the main road, we turned into dirt roads to make a loop through ethnic minority villages.

They were all very pretty and the landscape was breathtaking: vivid green paddy field in the foreground and dark green mountains in the background. Most of the houses were traditional, wooden structures and almost every one had its own pond full of ducks.

When the rain came again, we hid under the roof of some communal building. Incredibly, an old lady from a nearby house came out, carrying a bench for us to sit on!

A visit to Dien Bien Phu wouldn’t be complete without seeing the iconic, giant Victory Monument overlooking the town from the top of a hill. A long staircase led to an enormous, typical soc-realistic statue representing victory over the French troops in 1954. The evening view from the top of the hill at the mountains surrounding the large valley was stunning.

Dien Bien Phu has many more places connected with its military history but we weren’t really interested in visiting any of them. We were ready to leave Vietnam. At least for the time being.

The onward journey to Laos

Scared by the blog posts warning about buying the tickets to Laos at least a day in advance, we bought ours just upon arrival. Unnecessarily so, as there were plenty of buses running and lots of available seats. We left Vietnam on the last day of our visa by taking an early morning bus to Muang Khua.

How to get to Dien Bien Phu?

There is a small airport with pricey flights to Hanoi, but surprisingly none to Laos.

Dien Bien Phu has a good bus connection to Laos. The border town of Muang Khua should be reached in 5 h, while centrally located Oudomxay in 10 h. Be aware that during the rainy season those times could be much longer. You can reach Dien Bien Phu from many towns of the north west of Vietnam. The journey to Hanoi would take 10 h, Lao Cai- 6 h and Son La- 5 h. Mind that the standard of the buses could be lower than in the rest of the country. The bus station is located conveniently in the town’s centre.