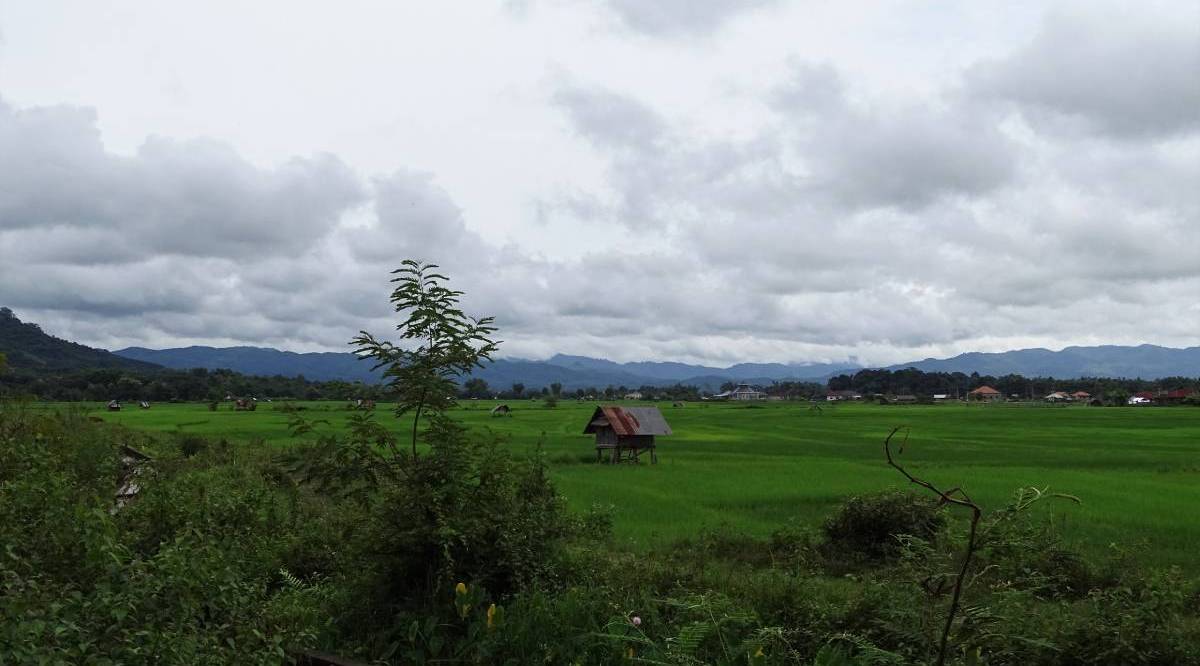 Luang Namtha is one of the main destinations in the north Laos which doesn’t mean it’s crowded or particularly busy with tourists. There are just a couple of guesthouses, restaurants, bike rentals and tourist agencies clustered around the night market. The easiest means of transportation in Luang Namtha is a bicycle, convenient for cycling from village to village, some of which are inhabited by various ethnic minorities. The majority of visitors come here for guided treks to the villages in the mountains.

Luang Namtha on a budget

We stayed in an inexpensive guesthouse located right in front of the lively night market. Night market lured us with the most affordable options for dinner though for vegans the choice was extremely limited. The food at the large morning market was even cheaper. It was an ideal place to get a supply of fruit and sweets.

Cycling to the waterfall

The first day in Luang Namtha welcomed us with rain. We waited for a couple of hours for the weather to clear and then rented the cheapest city bikes.

With a help of a free map we got from our guesthouse, we planned a loop through minority villages to Nam Dee waterfall (6km from the centre) and back. As soon as we turned from the main road we understood the loop might be shorter than expected.

The dirt road was muddy after the rain and full of stones, making it quite a tricky, slow and bumpy ride. It obviously wouldn’t be a problem if we rented more expensive mountain bikes.

The first village dotted on the map as the Hmong village was a total disappointment. Apart from the sign with information about that ethnic group there was nothing to see.

The second and -according to the blogs- the most exciting village inhabited by the Lanten people located in the close vicinity of the waterfall, wasn’t much better. We did enjoy the ride through a nice valley but we could not witness the indigo dying the village was famous for as it wasn’t the season.

We were negatively surprised by an entrance fee to the waterfalls. This small waterfall (although full of water in the peak of the wet season) was far from outstanding and definitely not worth the 10 000 kip fee.

Being disappointed as we already were, the discovery of a puncture in my back tyre was a real blow. The local people were very helpful: they tried to inflate the tyre (until they realised it was punctured) and pointed us towards a motorbike service station. Unfortunately, they were dealing only with motorbikes so had no patches available. We walked through the mud the entire 5 km back to the bike rental. As it turned out, unnecessarily – the guys at the rental assured us they would have picked us up if we had called them.

Cycling through the villages

The following day we gave Luang Namtha one more chance and rented the (slightly better) bikes again. The weather was on our side: it was hot and sunny. This time, we cycled along the highway towards the long distance bus terminal, following roughly the trail marked at the map we got from the tourist info. We did a couple of detours though as we preferred to cycle through the villages. The roads were full of mud after the heavy rain. In fact, one of the roads turned into a river so we had to change our route.

By far the highlight of the day was stopping at the Buddhist temple near the airport. It was bustling with people, mostly women, all of whom were wearing traditional Lao skirts. Some were chatting outside the temple but most were sitting inside on the floor. The ceremony must have been already over. While we were lingering outside, two ladies approached us and gave us plastic bags with a small bottle of water, sticky rice with banana and cookies each. We were overwhelmed with their kindness. It’s a pity we had no idea what the whole celebration was about.

A little bit further up the road, half of the highway was blocked by the tables set out for guests snacking on sunflower seeds and playing cards. There was Buddhist chanting heard from the loudspeakers. Still a bit later, we saw a funeral procession passing by. It was quite a lively Sunday afternoon.

Soon after, we turned onto a dirt road which I should rather call a mud road. It was quite a challenge to cross numerous puddles of deep, thick mud but somehow we managed not to skid. The scenery was lovely, though, with verdant green paddy fields and mountains in the background.

The first village we visited, according to the tourist boards famous for the weaving, was pretty empty. The weaving centre set up for tourists was surprisingly open, though, and we could observe a few women working at the looms. There was a small shop with handicraft just next to the workshop.

The next village, supposedly famous for the rice whisky, featured quite a few looms set in front of the houses. We spotted a few women weaving but we couldn’t find any barrels with the whisky. I climbed to the stupa located on top of a small hill and to enjoy a nice view at the valley.

Finally, we reached a well-maintained concrete road which took us all the way back to the town. Altogether, it was a pleasant day which slightly increased our rating of Luang Namtha.

The main drag is full of agencies offering 2-3 day treks to the villages in the mountains. The cheapest of them are around $30 a day, provided enough people participate. It might be challenging to gather enough participants to make it economical in the rainy season but it should be doable in the peak season.

How to get to Luang Namtha?
You can get a direct bus from Luang Namtha to Mengla in China (4-5h) and Dien Bien Phu in Vietnam (around 9h).
A journey to Luang Namtha could take 8-10 hours, depending on the road conditions and the means of transportation. Other major destinations are Vientiane (a very long journey- not recommended), Muang Xai and Phongsali.
All the long distance buses depart from the bu station located 10km outside the town. There are shared trucks to the bus station from the area around night market.
The nearer destinations depart from the smaller station located half a kilometer from the night market (towards the long distance bus station). The destinations served include Muang Sing and Boten.

One Reply to “Cycling around Luang Namtha”