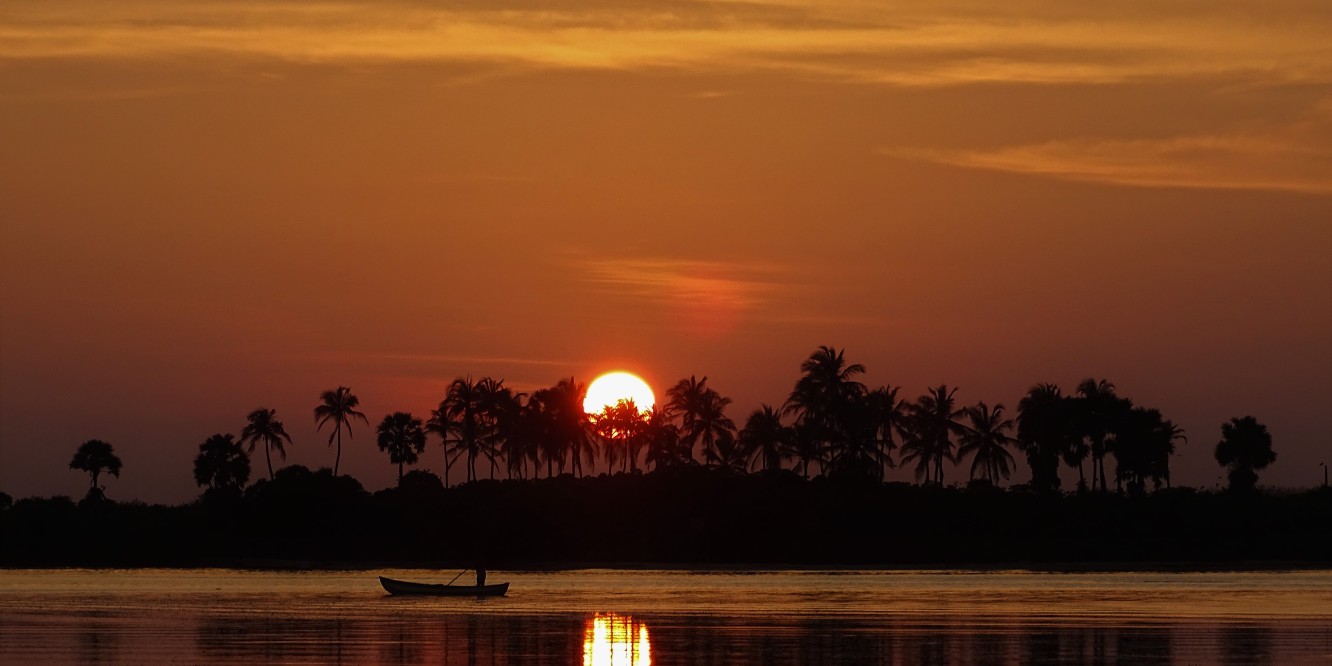 Sri Lanka is a beautiful, subtropical island located close to the south-east coast of India. Although off the main Asian backpacker trail, it fully deserves a detour. Despite a relatively small size, the country is very diverse in terms of landscape and has a rich cultural heritage. Whether due to its recent bloody history, it’s peripheral location or expensive flights, it does not suffer from mass tourism.

What to see and do in Sri Lanka?

Sri Lanka would be attractive to almost any kind of visitor. Its stunning beaches are still mostly unspoiled with high-rise buildings. It’s not difficult to find perfect, empty, sandy beaches stretching for miles.

The south and south-east sections of the coast are the most popular and attractive. Swimming is not always possible on the south coast of Sri Lanka. The water tends to be more on a rough side (after all, it’s the Indian Ocean).

However, coral reefs here and there provide peaceful pools for swimming and decent opportunities for snorkelling. Unsurprisingly, those locations, such as Hikkaduwa, Unawatuna, or Mirissa attract most tourists. Some of the rough-sea beaches, such as Tangalle, are far more picturesque, though.

Sri Lanka is world’s top surfing and kite-surfing destination and apparently a great place to learn those sports. The country’s diving mecca is Weligama, though east-coast Arugam Bay is more popular with experienced surfers. For kite-surfing, head to Kalpitiya on the west coast.

Those who prefer mountains and hiking will find ample opportunities to do so in the relatively low (highest peak is 2524m a.s.l.) but very picturesque mountains. It’s easy to find your way through the tea gardens or to lovely view-points (eg. Lipton’s Seat or Ella Rock). The beauty of the lansdscape in the tea country is unparalleled.

What makes the region even more appealing are the numerous, quite powerful and impressive waterfalls. Some of the waterfalls (such as Diyaluma Falls) create beautiful infinity pools, perfect for swimming. Others, like St. Clair’s Falls, can be seen only from a distance.

Even if you don’t want to hike, you can still enjoy the beauty of the Srilankan tea gardens. One of the best ways to soak in the vistas is taking a few hours long train journey right through the heart of the Up Country, from Ella to Colombo.

Sri Lanka is, without a doubt, a paradise for nature lovers. I have seen more birds and wildlife in Sri Lanka (without visiting a single national park!) than in all South -East Asian countries combined.

Peacocks were as common as pigeons, colourful, exotic birds were everywhere and watching thousands of flying foxes in the air was a daily occurrence. Most of the tourists flock to the national parks for safaris. Large herds of wild elephants are easy to spot in Minneriya NP in the Cultural Triangle and Udawalale NP. Meanwhile, Yala National Park on the west coast offers a fare chance of spotting leopards. Sadly, the traffic in the national park is high, which undoubtedly impacts the animals.

The coast hides even more natural treasures. Joining a whale safari in Mirissa almost guarantees to spot a blue whale- the largest animal ever existing. The west coast Kalpitiya is famous for pods consisting of hundreds or thousands of dolphins.

Last but not least, almost all existing sea turtle species feed and nest on the south coast of Sri Lanka. Unfortunately, they often get disturbed due to irresponsible tourism and the ‘rescue centres’ aren’t what you would imagine they should be.

Sri Lanka has a long and rich history. The region in the centre of the country called Cultural Triangle abounds in UNESCO Cultural Heritage sites. The extensive ruins of the ancient cities: Anuradhapura and Polonnaruwa contain massive stupas, ruins of temples and Buddha statues.

Colourfully painted Dambulla cave temple is the largest among dozens of others scattered all over the country.

Kandy, the cultural heart of the country, is most known for the massive Temple of the Sacred Tooth. However, nearby villages are full of other beautiful, historical temples.

Sri Lanka’s landmark is the ruins of a fort atop a singe rock dominating the otherwise flat landscape in Sigiriya.

Apart from the Buddhist monuments of the Cultural Triangle, you can also see architectural pearls left by the Dutch and the British. Neatly renovated, coastal town of Galle is a prime example of Dutch architecture but slightly run-down Matara or even tiny Kalpitiya are interesting as well. When in the tea country, don’t miss Nuwara Eliya – a typical British ‘hill station’.

There isn’t much of a peak season in Sri Lanka.Technically, the season lasts from December to February, but I haven’t experienced crowds over that period. In fact, early February was more busy due to Sri Lanka’s Independence Day. I’d advise you to avoid visiting popular destinations at the weekends and during public holidays (every full moon).

The rain is difficult to avoid in Sri Lanka. The main, stronger, Yala monsoon hits from the west between April and September (with the peak in April-June). Meanwhile, the milder, north-eastern monsoon affects Sri Lanka between November and March (especially in November-December). Storms and downpours could also occur in October. I was in Sri Lanka from mid-December till mid- February and it was raining regularly wherever I travelled (south coast, Tea Country and Cultural Triangle). The rain in the coastal area was mostly taking the form of short downpours while in the mountains it was more of a persistent rainfall turning into a drizzle. High in the mountains, there was also lots of fog. The vast majority of days were sunny, though.

The climate on the coast is hot and humid (28 degrees in the winter months), while on the central plains hot and dry (around 30 degrees). Mountains are cold (roughly 17-19 degrees). I was wearing long trousers, socks, fleece and a bandana in the evenings and mornings. Therefore, be prepared for all weather conditions.

People and culture of Sri Lanka

Sri Lanka is an ethnically and religiously diverse country. The majority of the population constitute Sinhalese people who are mostly Buddhist (though there is a significant Christian minority). The second most important group are the Hindu Tamils. They live in the northern part of the island and also the Upcountry. Finally, there are also Tamil-speaking Moors, Muslim descendants of Arab traders, who live mostly on the coast and around Kandy. The ethnic tensions didn’t quite die out in Sri Lanka, there are still clashes both along ethnic (Sinhala-Tamil) and religious (Buddhist-Muslim) lines.

Sri Lanka’s majority are ethnic Sinhalese people who in vast majority follow Buddhism. As Buddhism is very much part of the Sinhala identity, they treat their religion very seriously. Many people play mantras loud every (early) morning and evening for around one hour. Avoid accommodation near the temples – it could get very noisy at the time you would prefer to sleep.

The clergy can use designated seats on the trains and buses. If you’re a woman, you’re not supposed to seat not only next to but even in the same row as a Buddhist monk. Touching a monk is an absolute taboo. If you’re a woman, be sure you keep a safe distance from them.

Buddhists in Sri Lanka consider turning the back to Buddha statue offensive. You could take photos of a statue but not with it. You shouldn’t wear any image related to the Buddhist faith as a decoration, whether as a tattoo, a garment or an accessory. If you happen to have a Buddha tattoo, make sure you cover it at all times!

Like in many other south and south-east Asian countries, nudity is not acceptable, at least when away from the tourist beaches. If you’re a woman and you’re on a long, empty beach with no hotels in sight, I would recommend you to stay fully dressed. Knee-height dress would be appropriate. Remember to cover the knees, cleavage and shoulders as well as take your shoes off when you enter a temple!

Sri Lanka on a budget

Sri Lanka is a paradise for a backpacker who doesn’t share interests of a typical tourist. The food, transport and accommodation are all incredibly cheap. Those prices are by far the lowest in the entire region.

On the other hand, all the tourist attractions are unjustifiably expensive. The value for money of the Indian or South-East Asian UNESCO sites is definitely higher than those in Sri Lanka. All kinds of safaris, whether land or sea, are also very pricey. Another problem is cheating and over-pricing, common on the private buses, in shops and markets.

It is relatively expensive to get to Sri Lanka. The cheapest flights are -unsurprisingly -from Chennai and Banglore in south India. The online visa is easy to obtain. Extending the visa for 90 more days at the immigration office in Colombo is straightforward and reasonably priced. You’d receive it after a few hours wait.

Travelling around Sri Lanka is easy and cheap. You could get pretty much anywhere by bus. Buses are far from fancy but do the job of getting you quickly to your destination. The only problem is the ticket sellers on the private buses who like to make up prices for the tourists. Some people complain about crazy bus drivers. Indeed, they drive fast and like overtaking, especially on the coastal roads.

The second best alternative is a train. The trains are incredibly cheap, (especially 3rd class), the price is fixed and many routes, eg. along the south coast, are totally empty. I’d avoid train travel on busy routes such as Colombo to Kandy, though. Those trains could get extremely crowded.

People travelling in groups of three or as a family sometimes decide to rent an autorickshaw to explore the country. It gives a lot of independence and is a cool idea. Keep in mind that travelling across the Up Country isn’t possible with this means of transport. The engine of the autorickhaw isn’t strong enough for the roads in the mountains.

If you’re going to stay in Sri Lanka for more than a week, chances are you’re going to get bored with the local food at some point. The food is tasty and vaguely reminiscent of Indian cuisine but very simple and repetitive. Everything revolves around coconut.

The main meal of the day consists of rice (white or red) with dal, vegetable curry, sambal and fish or chicken curry. A typical night-time dish and a Srilankan speciality is kottu. Kottu is made of rotis chopped on a hot, metal slab and mixed with vegetable, egg or meat. Hoppers are equally popular. Those thin, cylindrical-shaped pancakes made of fermented rice batter, often have a poached egg inside.

Sri Lankan fried street snacks are very tasty. You can choose between savoury pastries with various meat and vegan fillings (rotis), deep- fried patties from dough or lentils (wade). Sri Lankans eat lots of bread. There are plenty of bakeries selling loaves of bread, toasted slices of bread and a variety of sweet or savoury buns.

Sri Lankans aren’t great with desserts. The tastiest and most commonly found is dodol – a dark brown, jelly-like substance made of jaggery and coconut milk (completely vegan). Another typical sweet is a helapa- desiccated coconut filling wrapped in a dry leaf.

Last but not least, Sri Lanka is home of high quality black tea. Don’t miss tea tasting experience in one of many tearooms in the Up Country, eg. in Nuwara Eliya.

Sri Lanka is a very vegan-friendly country with protein-rich food and a few vegetarian options at each buffet-style eatery. During my 2.5 month stay on the island, I tried 12 different vegetable curries. The commonly used vegetables are potatoes, green beans, tapioca, carrot, aubergine and pepper. Plain hoppers are vegan, while kottu could be made vegan. Wade and vegetable roti are safe as well (apart from breaded version).