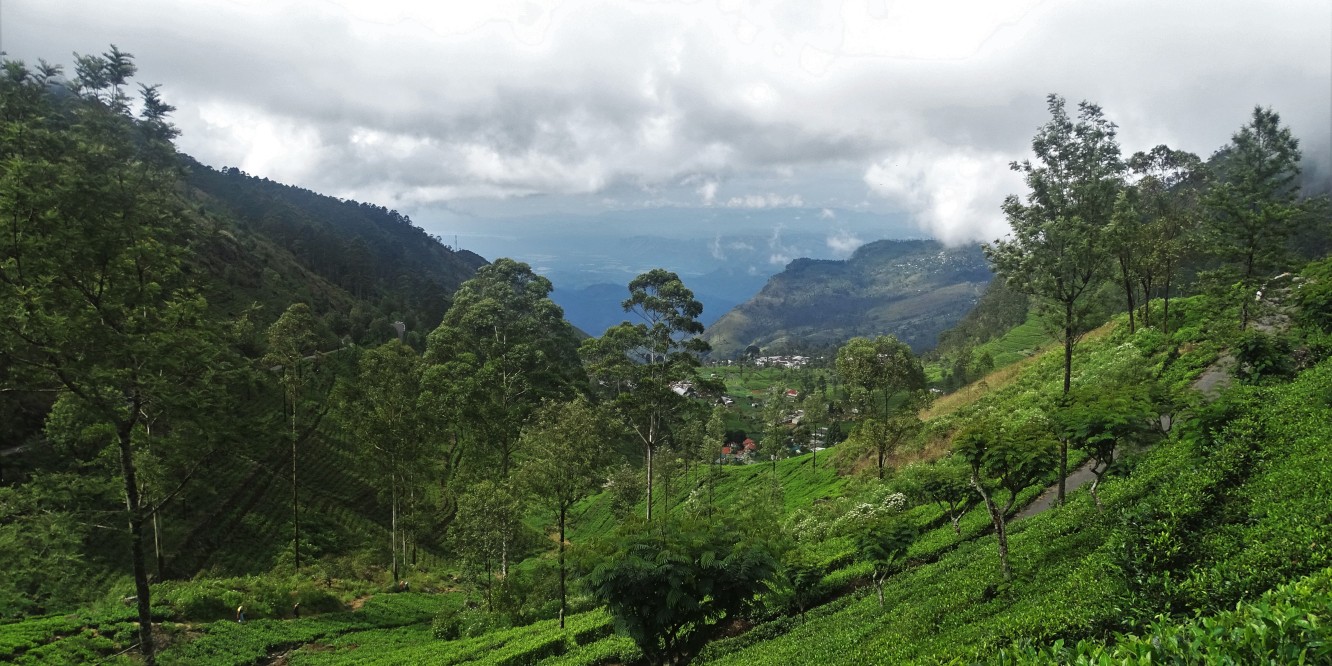 If you’re in the Up Country, you shouldn’t miss a visit to Lipton’s Seat – one of the best viewpoints in Sri Lanka. Poonagala peak is almost 2 000 m a.s.l. With good visibility, you could even see the coastline from there. Dambatenne Tea Estate, established by Sir Lipton, covers the entire hill. The best and cheapest way to get to Lipton’s Seat is an 8 km hike through tea plantations. It’s possible to combine it with a visit to Dambatenne Tea Factory.

Getting to Lipton’s Seat from Haputale

Haputale is the nearest town to Lipton’s Seat, so it’d make sense to start your journey from there. Our host in Haputale advised us to set off to see the Lipton’s Seat as early as possible, as the fog often covers the view way before noon.

You could take a bus no 326 to Lipton’s Seat gate (1.5 km from the actual viewpoint). However, those buses ran very infrequently, at 7.30 and 10.30, returning at 12.00 and 14.00. Better ask around for an up-to-date schedule to avoid disappointment. The buses to Dambatenne Tea Factory, 8 km from Lipton’s Seat are much more frequent (every 30 minutes or so). The stop for the Dambatenne-bound buses is just behind the main bus stand in Haputale (best to ask at the station for directions).

When we reached the bus stand, there was no bus around. A tuk-tuk driver told us it’d be better to start walking up and wave the bus once it appears. It was a great idea as instead of waiting we could enjoy the views at the lakes and plains below.

After just one kilometre, we reached the Haputale Hindu Temple. There are plenty of Hindu temples around as most of the people living here are Tamil (brought by the British from India to work at the tea plantations). A driver of a van which stopped at the temple offered us a lift. We were lucky to be dropped off at least 1km further than the Dambatenne Tea Factory.

We started following the tarmac road up to the top of the Poonagala hill. The road led continuously through Dambatenne Tea Estate. It was the first plantation of Mr Lipton of the famous Yellow Label. We could see lots of tea-picking ladies as we were slowly making our way up.

We didn’t need to follow the tarmac road all the time. There were plenty of easily visible shortcuts on the way, in the form of rock steps between rows of tea bushes. Sometimes the shortcuts were significant- it’s useful to check with the Google maps how the road leads to spare yourself lengthy serpentines.

Luckily, the tarmac road wasn’t a busy one. Tuk-tuks and motorcycles passed by only once in a while, so the walk was pleasant. Remember not to miss the ticket counter at the Lipton’s Seat entrance (100 rupees for a pedestrian). When we by-passed it to make a shortcut, an eager estate worker made us go back down to pay.

We arrived at Lipton’s Seat at around 11 am. By that time, clouds obscured most of the 360-degree panorama. Here and there, the clouds would lift periodically, showing some glimpses of how glorious the full view would be. If the visibility was good, you could see a few provinces and three lakes down below.

We took an obligatory photo with Mr Lipton’s sculpture, read an information board with a short history of the place and had tea from a small stall. The prices were just around 1/3 more than in the town which isn’t bad, considering the view.

Once we started descending, the visibility improved again. We walked down to the Dambetenne tea factory built by Sir Lipton in 1890. During a 30-minutes tour of the factory you could learn all about the processing of tea. Since we saw another tea factory in Munnar (India) in 2011, we skipped it. If you want to visit, bear in mind that Sunday and Monday are the days off.

We could have waited for a bus at the factory but decided to walk instead, since the views were incredible. We walked along a very peaceful road for a few kilometers more. Once my camera’s battery died, we stopped at the nearest bus stop and covered the remaining 6 km to Haputale by bus.

There are two named viewpoints on the way, (both marked on Google Maps): Eagle’s Rock View Point and Sherwood Deck. However, the views are breathtaking all along that road.

How to get to Lipton’s Seat from Haputale?
Take bus no. 326 to the Lipton’s Seat gate (1.5km from the peak) or a more frequent bus to Dambetanne Tea Factory (8 km if you walk along the road). Both buses start at the stop behind the main bus stand. If you walk from Dambatenne, you can take many shortcuts through the tea gardens: just keep on watching on google maps or maps.me where does the road lead to be able to come back to it.