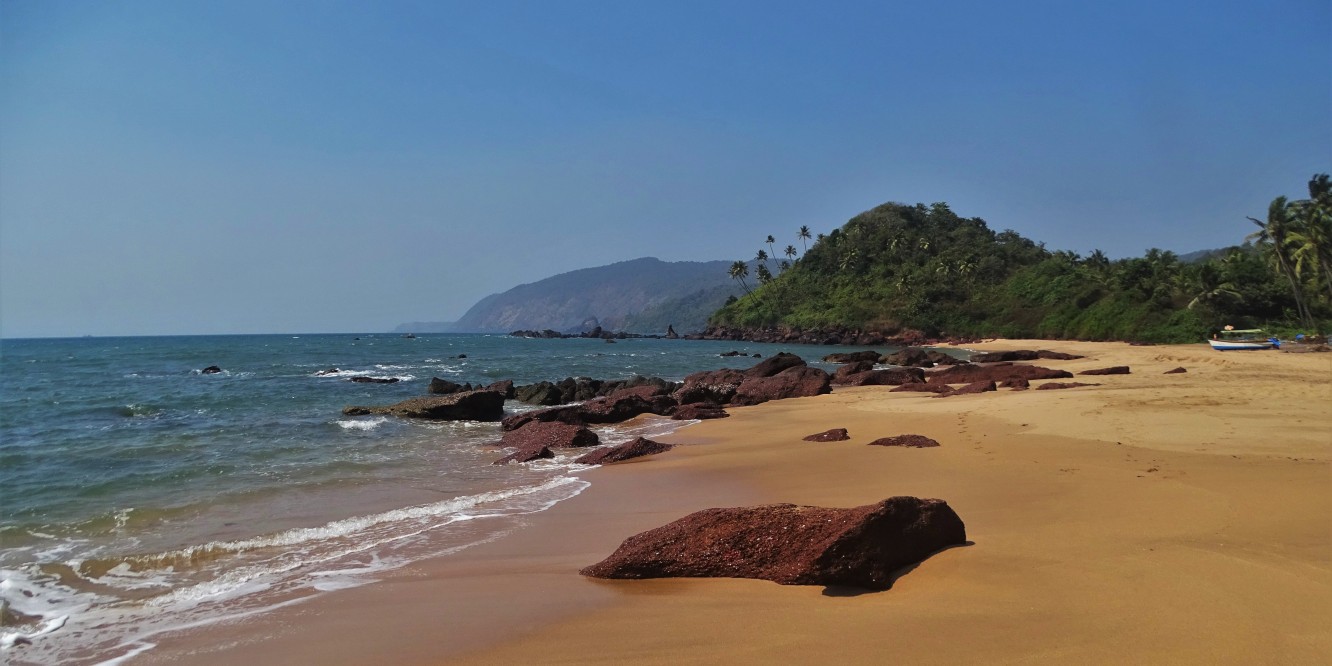 Goa is one of the smallest, yet most famous states in India. Sandwiched between Maharashtra and Karnataka, roughly in the middle of India’s western coast, Goa is a prime beach holiday destination. It is also a place where the legacy of centuries-long Portuguese rule is still very much alive. Whether you’re searching for relaxing time in nature, party time, or are interested in cultural heritage and architecture, Goa would satisfy your needs. It is also a perfect place to start the exploration of the subcontinent, providing smooth acclimatisation.

Goa might sometimes give the impression it’s not India at all. No wonder: it became part of the Indian republic only in 1961. Until then, for 450 years, it was a Portuguese colony. Portuguese culture had a greater impact on Goa than the British had on India. It applies to religion as much as to architecture and cuisine. Currently, just 25% of Goans are Catholics, which is due to a huge influx from the other parts of India, but also the emigration of old aristocratic families.

Goa is sparsely populated compared to many other parts of the subcontinent. Its cities resemble peaceful towns. It is also visibly more affluent and cleaner than the rest of the country. Local people lead a laid-back lifestyle similar to the Mediterranean vibe. Goa is unique also because of the significant and lasting influence of Western tourists and travellers, especially the still-existing hippie ex-pat community.

The hippies who started arriving in the 60s created their vision of Goa and made it a reality. Only here, you can get away with walking around half-naked, drugged and drunk, while locals don’t even bat an eyelid. In other words, you’d need to try hard to hurt the sentiments of the locals. Just remember to cover your knees and shoulder when you enter the church or temple.

Unsurprisingly, Goan cuisine uses plenty of fish (such as kingfish, mackerel, pomfret) and seafood. Perhaps less obviously, Goans widely use pork (rarely seen in other parts of India) and beef (outright forbidden in a few Hindu conservative states). The two local kinds of curry you should try are fiercely spicy Vindaloo (based on wine vinegar and garlic, served originally with pork) and a much milder Xacuti (traditionally served with lamb or chicken). However, nowadays both curries exist in a vegan version, too. Meat-eaters shouldn’t miss the ubiquitous ras omelette (omelette served with spicy chicken stew). Unlike the rest of India, Goans use a lot of good quality bread. You can find bakeries with all kinds of rolls (pau) and pretzels in every town and village. Due to neighbouring states influence, south Indian food such as dosa and Maharashtra street food star: pau vada (deep-fried potato snack inside a roll) became a staple.

What to see in Goa?

Goa is most-known for its beaches: deservedly so. Although they don’t feature crystal clear waters or coral reefs, they are still by far the most beautiful in mainland India. Very importantly, they are clean, apart from occasional animal poo. Ironically, the beaches with no shacks, such as tiny Butterfly beach, are most likely to get littered as there isn’t anyone to clean them up. Prepare to share the beach with (friendly, not aggressive) canines and bovines. Touting isn’t a thing in Goa! Those few hawkers who occasionally turn up are discreet and understand the word ‘no’.

In Goa, you can choose the beach that suits your profile. Searching for a hippie crowd and beach parties? Head for North-Goan Arambol. Like liveliness and water sports? Go for Calangute or Baga. All you need is peace? Choose south-Goan Agonda, or pristine, furthermost south beach- Galgibaga. Looking for calm waters and a place to swim, somewhere in between liveliness and peace? Palolem is the answer. Thanks to this unspoken segregation, you know what to expect.

Goa is far more than beaches: all along the coast, you can see the ruins of old Portuguese fortresses, such as Cabo de Rama (near Agonda) and Aguada (near Calangute). True gems of colonial architecture await inland. You should miss visiting Goa’s capital Panjim, with its picturesque Latin Quarter and iconic Panjim church. Just a short ride further is Old Goa, a UNESCO World Heritage Site. Not a city, or even a town, it’s a myriad of white-washed churches scattered over a large area.

Most of the people just pass by Margao to get to South Goa. This large (by Goan standards) city is filled with old crumbling colonial residences and traditional houses. But to see spectacular Portuguese mansions, go to villages surrounding Margao, such as Chandor and Loutolim.

Goan coast is very picturesque, but there are more places inland where you can admire the natural beauty. Most importantly, Goa prides one of the largest waterfalls in India. 320- meters, multi-tiered Dudhsagar Falls pours down right across the rail tracks. The falls show their full strength and glory just after the monsoon season. Dudhsagar Fall is located in the middle of the Mollem National Park, a large area covered with lush green forest. If you like birdwatching, visit Salim Ali Bird Sanctuary, located on a swampy island on the Mandovi river.

When to go to Goa?

The beach season lasts pretty much from November till March, peaking at the end of December/ beginning of January. Peak season should definitely be avoided: beaches get crowded and prices spike. February still has nice weather of around 32 degrees in the day and 24 at night. With the sea breeze, AC isn’t necessary to have a good night’s sleep. Additionally, the end of February is the time of Goan Carnival. If you want to see the waterfalls in their full glory, head to Goa in November. Whenever you go, avoid weekends, when Goa gets flooded with local tourists.

Travelling to and around Goa

Dabolim international airport, the only one in Goa, is located in Vasco da Gama, smack in the middle of the state. There are a handful of international flights to the Middle East, making it easy for a connecting flight. However, flying to Mumbai and travelling from there will be incomparably cheaper. There are plenty of domestic flights from various cities in India to Goa. Once more, those flights are double or triple the Mumbai flight fare.

You can easily access Goa coming from the north (Mumbai) or south (Banglore). Mumbai is just 7 hours away. You could choose an overnight sleeper train or, if you want to enjoy the scenery of the Konkani coast, an early morning seater. Most trains stop in Thivim (for Baga/Calangute) and Margao (Madgao) (for south Goan beaches). For far north like Arambol, by far the most convenient is Pernem, where very few trains stop.

There are plenty of luxurious, long-distance buses to Goa from Mumbai and Pune. However, the journey will be less comfortable and more expensive than by a sleeper 2nd class train.

Goa state bus corporation is called Kadamba. Blue-and-white Kadamba buses are much faster than the private ones and you certainly will gett charged the correct fare. Kadamba buses have a separate counter at each bus station. Tickets for the Kadamba shuttle (connecting two cities with no intermediate stops), can be bought from a special shuttle counter only once the bus arrives. Many of those shuttle buses are air-conditioned. The second best option is Karnataka state bus corporation vehicles (operating on longer routes). Travelling by private buses can be a frustrating experience: they start only when completely full and stop for 10-15 minutes at each larger bus station on the way.

The fastest and most pleasant way of exploring Goa is by renting a scooter.