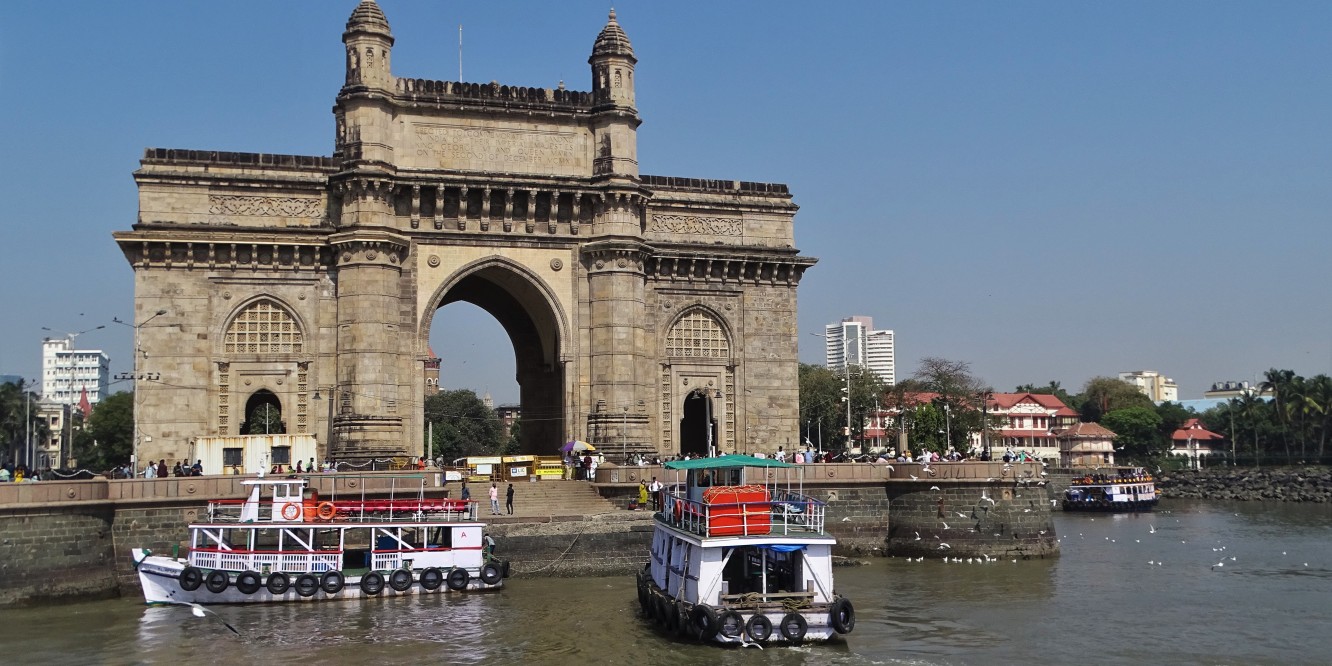 If you have just one day to see Mumbai, it’s best to focus on the city’s three UNESCO World Heritage Sites. Chhatrapati Shivaji Maharaj Terminus and a complex of neo-Gothic architecture near Oval Maidan are just walking distance apart, while the ancient Elefanta Caves are a one-hour boat ride from the iconic Gateway of India.

If you arrive by train (to CSMT) or take a local train from the airport, you will find yourself at the first of Mumbai’s UNESCO sites. Mumbai’s most important railway station and one of the biggest in the country, was constructed by the British in 1887 and named after Queen Victoria to celebrate her Golden Jubilee. In 1999 regional government re-named it after the greatest Maharashtran ruler, Shivaji, in a de-colonisation effort.

The station resembles more a palace than a railway station. It represents an extravagant mixture of the European gothic and colonial ‘oriental’ styles. It’s worth entering the station to see the rich interior decorations at the ticket hall.

You can see all the most impressive Victorian edifices inscribed onto the UNESCO list by taking a roughly 3 km walk from CSMT to the Gateway of India.

Starting from the railway station, take Dr Dadabhai Naoroji Rd to admire the neo-Classical, neo-Gothic and Edwardian 19th and 20th century buildings. The road will lead you to the white marble Flora Fountain. A few steps from the fountain, you will see a massive, grey edifice of the Victorian High Court.

Directly behind it stretches the Mumbai University campus. You can hardly miss it due to Rajabai Clock Tower, which was meant to be a copy of Westminster’s Big Ben. The two university buildings (the Convocation Hall and the Library) mimic French Gothic sacral architecture. One even has a rose window on the facade. Interestingly, the university buildings weren’t funded by the British but by the local magnates: wealthy Parsi philanthropist Sir Cowasji Jehangir Readymoney and Jain entrepreneur Premchand Roychand, (who made a fortune on cotton and banking).

Once you see it, go back to the main road (Mahatma Gandhi Rd) and carry on south. Soon, you will see a row of historical buildings to your right. Firstly, David Sassoon Library (funded by a leader of the Jewish community in Mumbai) and, adjacent to it, Elphinstone College (which preceded the Mumbai University, later to become a part of it). On the other side of the street, you’ll find a characteristic statue of a black horse (Kala Goda). You might wonder why it’s a statue of a horse without a rider. That’s another example of decolonisation policy. Originally, a black equestrian statue of Edward the VII stood there but eventually, it was replaced by a statue of a black horse alone.

A bit further down the road, located in a large green compound, stands Chathrapati Sivaji Maharaj Vastu Sangrahalaya. Previously named  Prince of Wales Museum of Western India, this domed, 19th-century building inspired by Mughal palatial architecture serves as the art and history museum. It contains one of the best collections of artefacts in the country and visiting it is likely to take you a good part of the day.

From there, turn to Chhatrapati Sivaji Maharaj Marg – it will take you straight to the Gateway of India. The Gateway of India is an arch resembling closely India Gate in Delhi. It was built in 1924 to commemorate the landing of King George the Fifth. In a symbolic move, the last British troops left India in 1947 through the very same gate. A representative Taj Mahal Palace Hotel (aka the Taj), built in Indo-Saracenic style in 1903, stands right in front of the gate.

Once you reach the Gateway of India, you get to two boat jetties. One of them is used by the boats plying the route to the Elefanta Caves, another UNESCO World Heritage Site. The Portuguese gave the name ‘elefanta’ after an elephant sculpture which used to stand on the island. Elefanta Caves are a complex of five Hindu cave temples dating from around 5th – 7th centuries. There are also two older Buddhist cave temples are located in the far end of the island.

You can get the boat tickets at the counter (opposite to the Taj) or directly from the hawker. There are two kinds of boats available, the ‘luxury’ ones being smaller and faster to fill up but more expensive. It takes around one hour to get to the island where the caves are located.

A toy train runs a ridiculously short distance along the island’s jetty and stops short at the stairs leading up the hill. From there it’s just a short walk to the caves. Beware of the monkeys which frequent the route.

The cave number one, devoted to Siva, is the largest and the most important one. Its central part is a Trimurti statue (Hindu trinity of Brahma, Vishnu and Siva in one, three-faced form). Directly to the left of the Trimurti you can find half- Shiva, half-Parvati (his consort) statue. The carvings to the left show Siva creating the Ganges out of his dreadlocks. In the main hall , you can also find a shrine with a Siva lingam (the fallic symbol of god Siva) and other depictions of Siva, eg. as Yogi in meditation pose and a cosmic dancer. The east and west wing of the cave also contain some sculptures and reliefs. If you don’t want to spend money on the guide, Wikipedia page has a very detailed description of all the bas- reliefs.

The remaining caves numbered 2 to 5 are far less impressive as very little of the original sculptures survived. Much older Buddhist temples, together with ruined stupas and water tanks, can be found on the other side of the ravine.

Upon return from the caves, you could get to the top of the Canon Hill to see the view of Mumbai skyline and two large cannons.

How to reach Mumbai?

By air
Mumbai remains a ‘gateway to India’ with direct flights from all over the world. Flights to Mumbai (along with Delhi) tend to be the cheapest of all Indian destinations. The airport has two terminals: international (no. 2) and domestic (no. 1). Confusingly, the international terminal serves also domestic Air India flights.
Multiple Indian domestic carriers offer cheap flights to Mumbai from a wide selection of airports across India. The cheapest flights, from large airports such as Delhi, Banglore and Kolkata, cost around 3 000 INR. There is a shuttle bus connecting both terminals.
For a detailed description of a journey from the airport to the CSMT, check here

By train
Mumbai has a few train stations apart from CSMT. When you’re buying a ticket, check that the end station is CSMT, or Mumbai Central. Otherwise, you’d have to travel a long way from north of Mumbai (where Lokmanya Tilak Terminus and Bandra Terminus are located).

Mumbai is a reasonably short train journey from Pune (3h), Ahmedabad in Gujarat (6h) Madgaon in Goa (10h), Bhopal in MP (13h) and Mangalore in Karnataka (15h). Both Delhi and Banglore are around 22 hours journey away, while Udaipur in Rajastan, 19h.

By bus
Bus terminals are conveniently located near some of the railway stations. ‘Asiad Bus Terminal‘ on Ambedkar Rd is a walking distance from Dadar Station, while MSRTC (Maharashtra State Road Transport Corporation) buses stop right next to the Mumbai Central Terminus. Private buses start also from Crawford Market near CSMT.

Buses to nearby Pune are the most frequent but you could also reach destinations in Goa, MP, Karnataka and Gujarat.

How to move around Mumbai?

Suburban trains (central and western lines go all along the city from south to north) are cheap, comfortable (outside peak hours when they get extremely crowded) and convenient means of transportation.

Bus network is wide and the vehicles are new and modern. However, they tend to get crowded throughout the day.

Unlike other Indian cities, auto-rickshaws operate only in the suburbs. Hence, the car taxi is the only option for private transportation. Go for Uber or Ola rather than the traditional black and yellow cab.

Mumbai metro operates in Navi Mumbai (new Mumbai) only so it’s of not much help for tourists.