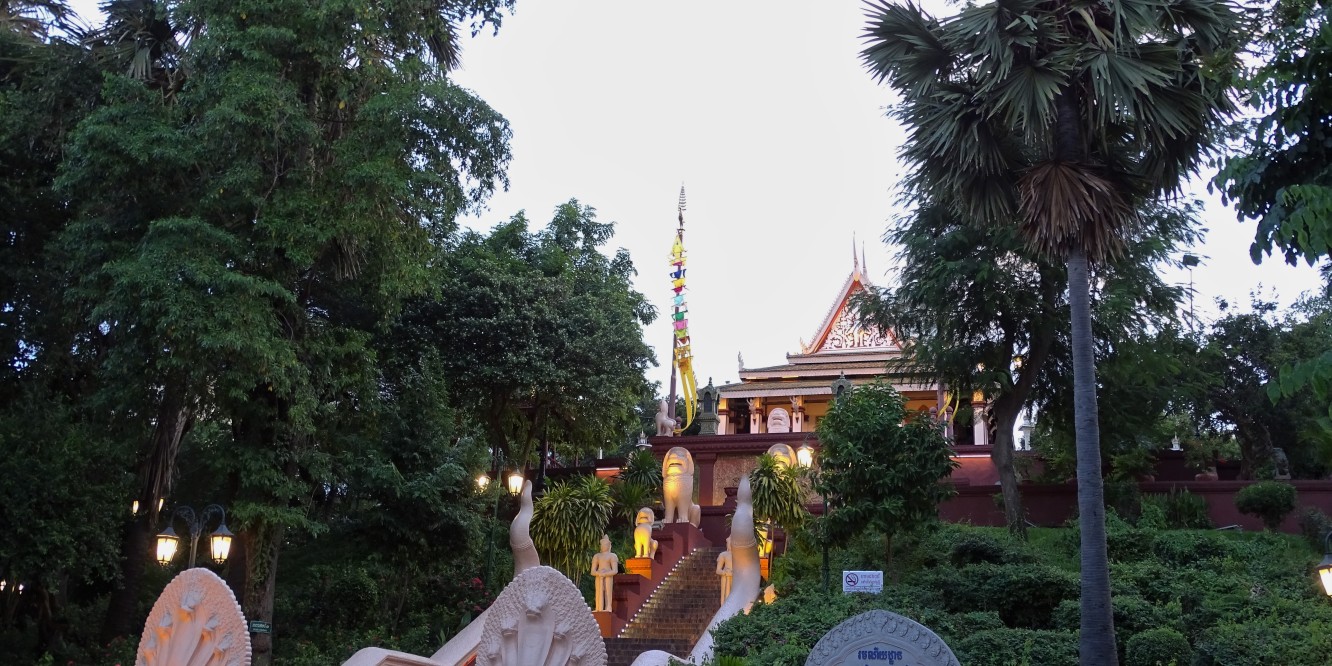 From the tourism perspective, Phnom Penh doesn’t have much to offer. There are a few interesting markets, Mekong river and some relatively new temples. But the most important places to visit are connected with the recent and very dark history of the country.

One of the first places we visited in Phnom Penh was the Russian Market (called so due to large volumes of Russian customers visiting the market in the 80s). Russian market was just a square of tightly packed stalls in narrow, dark alleys. It wasn’t really a local market. Most of the merchants were selling souvenirs or supposedly brand clothes to tourists. Nonetheless, I had no problem finding a light, vegan lunch for just $1 and my favourite ‘sweet soup’ made of sweetened coconut milk and selection of beans at the food section of the market.

The Central Market -one of capital’s landmarks- looked and felt very different. It was a grand building designed in the 1930s by a French architect. Inside, it was spacious and well organised. There were lots of proper shops in the main lobby, some of them selling jewellery.  Unlike the Russian Market, Central Market was catering mostly for the locals.

It was its fringes with the food sellers that looked most lively and interesting to me. I was surprised to find honey still in honeycombs. I could not walk past various sweets wrapped in banana leaves without trying some.

Mekong flowed proudly and unhurriedly through the capital and the riverside was quite a pleasant place for a stroll, particularly in the evening. There were some tourists boats offering sunset boat rides but we were far from interested. Instead, we watched local boys playing various games on the promenade, right in front of the night market and listened to amateur vocalists performing at the market’s stage.

On the first night we accidentally discovered a red light district not too far from the night market. As usual, I was amazed by the amount of old, white men hanging around.

Wat Phnom was the nearest attraction to us, literally five minutes walk from Diego’s house. As all buildings in Phnom Penh, it was quite new (build in 1920s) and certainly not worth $1 the foreigners were charged.

Wat Phnom was surrounded with a small park. Getting there required climbing a short fleet of stairs. The stairs were decorated with typical snake- shaped balustrades and the wat had the same steep roof as all temples in Cambodia and Thailand. The interior was more interesting, with walls and ceiling covered with colourful paintings.

Having read that the Silver Pagoda was equally new and basically just a copy of the Grand Palace in Bangkok, we gave it a miss.

Undoubtedly the most interesting, however much disturbing were the sights connected to the infamous Khmer Rouge regime: S-21 prison (aka Tuol Sleng Genocide Museum) and the Killing Fields.  If you decide to visit those sites, please dress and behave respectfully.

It was easy, cheap and comfortable to reach S-21 by a brand new public bus. The route number 01 led along the main avenue of the city, Monivong Boulevard. It took us just 25 mins to get with this empty, air-conditioned bus to the bus stop from where it was another 10 minutes walk to the museum. Ticket cost only 1500 riel (beware: no change is given).

The visit to the genocide museum wouldn’t make much sense without hiring an audio guide. Seeing everything without hurry and listening to the entire audio-guide, we spent in the museum 3.5 hours.

It would be worth to check on which days the screenings of documentaries take place. We didn’t realize there were just a couple of screenings a week showed at very specific times and so we didn’t have a chance to watch those highly rated movies.

The museum was full of graphic, disturbing photos and the audio-guide gave us an idea of life under oppressive Khmer Rouge regime. Apart from the photos, there wasn’t much to see. It was simply a school building which had been turned into a prison and a place of torture but by now most of the rooms were empty. It was only after listening to the audio guide that the place became alive with the suffering of the victims.

One of the few survivors of the prison was sitting at the final stop of the trail, selling his book and answering questions. Having read and listened to his whole life story, I could not think of anything I could possibly ask him, though.

It’s possible to see both the S-21 museum and the Killing Fields Memorial Site on one day but we broke it into two days as it was so overwhelming. The Russian Market is just a few bus stops further down the road form S-21 so it’s easy to combine those two in one visit (ideally starting with the market as you probably wouldn’t be in a mood for shopping after the audio tour).

GETTING LOST ON THE WAY TO THE KILLING FIELDS

Unfortunately, the Killing Fields cannot be reached by public transport. A tuk- tuk taken straight from the street would charge around $15 for a return trip. We used the Pass App instead which cost us mere $4 one way.

Shortly after boarding our tuk tuk we started wondering where were we going. Our driver didn’t speak a shred of English and kept on asking us something while heading in totally opposite direction, towards the city centre. It took us quite a while to realize he simply had no clue where he was supposed to go, despite having the same Pass App map in front of him as we did. It was a bit of a challenge to guide a non-English speaking, map-reading illiterate driver to the destination. After having a 30-minutes loop around the city centre, we finally took the right direction and arrived to the site after a ridiculously long, one hour drive.

The driver was quite nice, though: he still charged us what the app was quoting and offered to take us back for the same price. Lesson learnt: check with your tuk tuk driver beforehand whether he knows where he’s going, even when using PassApp, Grab or the like.

KILLING FIELDS- A PUNCH IN THE STOMACH

The Killing Fields (aka Choeung Ek Genocidal Centre) made even stronger impression on me than the S-21 museum. Just like in the previous case, only due to an excellent audio guide a normal landscape transformed itself into a place from the worse nightmares.

Just to give you an example. I wouldn’t give a palmyra palm tree growing among the desolate landscape a second glance if not for the audio guide. The knife-sharp outer leaves of the palm were used for slitting the throats of the victims. Cheap and efficient as all Khmer Rouge killing methods.

The final stop of the route – the main memorial stupa, made of glass shelves containing hundreds of skulls and thousands of bones- moved me to tears.

A small museum adjacent to the entrance contained just same basic information we already learned at S-21 but it was worth to watch a short movie screened there.

How to get to Phnom Penh?

You can fly to Phnom Penh from Bangkok, Kuala Lumpur, Ho Chi Minh City or Hanoi. Cheap, regional carriers operate on those routes. Particularly a budget flight via Bangkok would make it cheaper than flying from other continent via Middle East.

There are long-distance buses connecting Phnom Penh with Ho Chi Minh City (Saigon) for as little as $14. The journey should take 6-7 hours. Traveling by bus from Bangkok doesn’t make sense- the distance to Siem Reap is much shorter.

Naturally, Phnom Penh is well connected by bus to all destinations within Cambodia, though only a couple are close enough for a comfortable journey. Personally, I wouldn’t venture further in one go than to Kampong Cham (3h), Kampot/Kep (4-5h), Sihanoukville (6h), Siem Reap (6-7h), Batambang (6h) or Kratie (6-8h). The duration of the journey vary greatly depending on the bus/minivan company.

The only train line leads from the capital via Kampot and Kep to Sihanoukville. The train is really short, empty, air-conditioned to very uncomfortable level (really freezing!) and runs only from Friday till Sunday. The price is comparable to that of a bus ticket.

UPDATE: the second, Western rail line from Phnom Penh to Poipet on the border with Thailand opened in 2018.