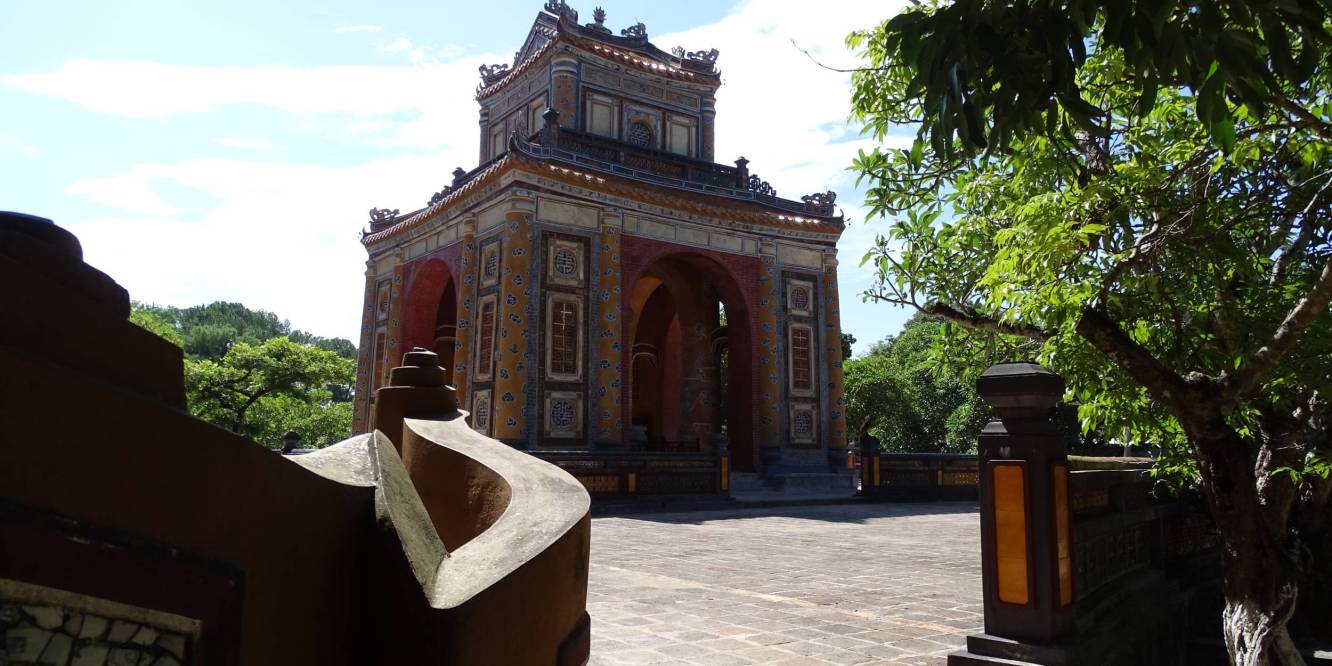 Our first full day in Hue was one of the most intense ones of the whole trip. We designed a cycling route which would include the three most important Nguyen dynasty emperors’ tombs as well as the Temple of Literature and Thien Mu Pagoda located on the other side of the river. Altogether we made roughly as 40 km loop in a 40 degrees heat.

We hired bicycles at one of the numerous bike rental shops in the touristic district of the city and left early to beat both the heat and the crowds. We started our loop with the nearest and most visited, 19th century Tu Duc tomb.

Overall, getting there wasn’t particularly pleasant- we had to take quite a busy Dien Bien Phu Road. Only when we turned in Le Ngo Cat Road, it became quiet and peaceful. First, we passed by an old cemetery with tombs on a forested hillocks and then by a village selling colourful incense. The road led us directly to the entrance to the Tu Duc tomb.

Once we arrived at Tu Duc’s tomb, all the street vendors started inviting us to park our bikes in front of their shops which inevitably meant we’d need to buy something upon return. Later, we learned that parking at the shops wasn’t necessary- we could have parked for free at the entrance.

We bought the combined ticket for three tombs (Tu Duc, Minh Manh and Khai Dinh) and the Hue Citadel. It wasn’t cheap but in my opinion all of those tombs were really worth visiting. They were all built in completely different styles, too so visiting just one tomb wouldn’t do Hue justice.

The tomb of the eccentric emperor

Tu Duc was a physically weak emperor who spent long years designing his own tomb and writing his own funeral stela. The tomb’s grounds were enormous and contained a huge lake full of lotus flowers, a wooden pavilion on the island, tree -covered hillock and a couple of minor tombs of his relatives.

We had the tombs grounds mostly for ourselves since we arrived just after the opening. Once we finished, we bought a sugarcane juice at ‘our’ stall and rode to a small path leading slightly uphill.

Vong Canh Hill- the best view of the Perfume River

We were heading to Vong Canh hill (marked on Google maps as ‘the hill(bunker))’ and on Maps.me as ‘Viewpoint of Perfume River). The hill was covered with pine trees and had some war-time bunkers scattered around but the main reason to visit it was a stunning panoramic views of the Perfume river and the countryside.

From there, we had an exhilarating ride down through the forest. We went off the main road and took some tiny lanes through the villages and eventually ended on a larger road, right in front of another tomb which we didn’t even know about.

Thieu Tri tomb- not on a tourist trail

It turned out to be the tomb of Thieu Tri, Tu Duc’s father (marked on Google maps as ‘Lang vua Thieu Tri’). After a small group of Vietnamese tourists left, we were the only people around. The entrance fee was much cheaper than to more famous tombs which was understandable since the tomb wasn’t renovated and wasn’t as grandiose either.

The fact it wasn’t as shiny and well kept than the others gave it a fair dose of charm. We started understanding the pattern: lotus pond, gate, a pagoda, stone figures of mandarins and elephants were all indispensable elements of the imperial tombs.

The Minh Manh road leading to the Minh Manh tomb wasn’t particularly busy and it lead picturesquely along the Perfume river. After a few kilometres, we reached a bridge, full of trucks and heavy traffic. We saw a couple of com bin danh stalls in a village just before the tomb and decided to have the lunch there once we were back.

The road leading to the tomb had lots of up and downs so we were struggling quite a lot. A man from a restaurant on our left called us, saying we could leave our bikes there. We knew what that would mean so we ignored him. There was a path leading just outside his restaurant. I doubt it was his property so the most reasonable thing to do would be to simply take that path completely ignoring the restaurant owner and park for free in front of the tomb.

The perfect symmetry of Minh Manh

19th century tomb of the emperor Minh Manh’s (the father of Thieu Tri) was very different from Tu Duc’s one. The entire layout of the compound was simply jaw-dropping. I was impressed with its immaculate symmetry, with bridges upon bridges crossing the artificial lakes and leading to a series of tower-shaped buildings on perfectly square islets. The last bridge led up the stairs to a closed gate. Minh Manh tomb lied right behind it.

There were a few people visiting this tomb around lunchtime, but luckily it was far from crowded. After visiting the tomb, we had quite a decent ‘commoners rice’ in the cheap restaurant near the bridge over Perfume River.

The way to Khai Dinh

We crossed the bridge again, this time carrying straight on the main road only to turn left back into Minh Manh Rd. It didn’t take us long to notice the last of the tomb’s in the distance. At the end of a paddy field, we saw a grey- coloured tomb spreading over half of a green hillock. It was the newest of the three tombs, built for Khai Dinh’s emperor in the 1920s.

The tomb of the Westernised emperor

Khai Dinh was in love with the Western, particularly French culture and this was very clear looking at the design of the tomb – a fascinating mixture of Western and Eastern decorative elements.

The most striking feature of this tomb was a series of stairs cut in concrete (chosen as a modern material) and the tomb’s baroque interior, dripping with gold and crystal.

Khai Dinh was the busiest of the tombs we visited that day and it no doubt had something to do with the fact it was already the afternoon when we reached there.

Esplanade of the Sacrifice

We still had a long, rather unpleasant ride along the Minh Mang Rd back to the city. We stopped just one time when a large fenced compound covered with trees caught our attention.

It turned out to be Da Nam Gian (Esplanade of Sacrifice to the Heaven and Earth). It had been used for centuries as grounds of important rituals performed by the emperors. There wasn’t much to see there, apart from a raised, circular platform.

On the other side of the Perfume River

It was still a long time till the sunset, so we decided to muster some energy and see the remaining sights on the other side of the river. We took a road along its banks (Bui Thi Xuan) to get to the nearest bridge.

We were amazed to see at one point a group of men swimming in the river. As I mentioned before, it was quite a big river and we were in the middle of the city so I’d never consider it clean enough to swim in. Seeing the men, I got encouraged to dip my swollen feet in the river.

Instead of a normal road bridge, we chose a very narrow lane leading along the railway bridge. It allowed us to avoid heavy traffic on the neighbouring bridge. After a longish but picturesque ride along the northern bank of the river, we got to the landmark Thien Mu pagoda. This iconic multi-tiered red tower stood proudly on top of a hillock which was overlooking the Perfume River.

Since it was late afternoon, we came across plenty of tourists cycling from their tourist ghetto to watch the sunset from the pagoda. The entrance to pagoda was free but the parking wasn’t. Fed up with paying for parking, we passed by the pagoda, parked next to some old lady selling herbal tea and came back walking.

The tower could be admired only from the outside and the pagoda deeper in the grounds wasn’t particularly interesting. There was a nice selection of bonsai trees within the compound, though.

Turtles at the Temple of Literature

Being so close, we couldn’t miss the Temple of Literature, just a short ride further down the road. Unlike Thien Mu pagoda, it was completely deserted. We entered through an imposing gate and saw two rows of 32 stone turtles. The turtles were carrying stelas with the names of 239 men who passed tough National Examinations in order to become civil servants.

Finally, we slowly made our way back home, cycling all the time along the river. It was already getting dark when we stopped in front of the illuminated Citadel with an enormous Vietnamese flagpole in front of it. Some people were flying kites in the vicinity.

We crossed the second bridge and returned the bikes just before the rental joint’s closing time. After another lavish dinner at our favourite com chay, we trodded heavily to the hotel. We were completely knackered but very happy with the day.

What did we skip

Initially, we considered visiting also Gia Long tomb which was further down south from Khai Dinh tomb. Knowing that the road there would be busy and it’d be a long ride, we decided against it.

We were planning to see also an amphitheatre but read it was closed for renovation. Anyhow we’d need to make quite a detour to get there, so we gave it a miss.

How to get to Hue?

Hue has a small airport with flight connections to Hanoi, HCMC and Da Lat operated by the cheap Vietnamese airlines. The flights would be much more expensive than the train or bus, though.

Hue is also on the main train line from HCMC to Hanoi. It takes 13-15 hours to Hanoi and 20-22 hours to Ho Chi Minh City. Hard seat to Hanoi would be slightly more expensive than a bus ticket, the sleeper berth roughly twice as expensive as the sleeper bus.